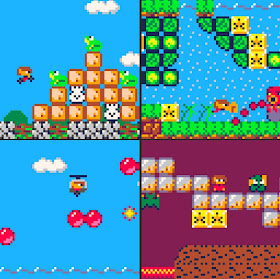 It's a Friday and what an awesome way to end the week as I've just come across a demake that is sure to excite even the most purist of retro gamer. Now I'm sure many of you have played Alex Kidd; a fantastic side scrolling platformer released for the Sega Master System console in 1987, which was also built into most Master System II's. But how would you like to play an almost complete demake, but released for the Pico8? You would good! Because read on as this is a very impressive release indeed!

Developed over so many months, Alex Kidd in Pico World is a new release by Domarius that has been squashed down to fit on the token limit of the Pico8, with an almost complete version of the classic game while sacrificing certain elements such as the short level and symbol puzzle after the princess to get the crown, the graphical level map, title screen, power ups except the ring, as well as a few other bits that wont affect the game play in anyway. Furthermore, the developer has had to crunch down the music into fewer channels to fit it all in the game, making use of the arpeggio feature to simulate multiple note harmonies

But here's all the good stuff, the stuff that has made it into this version for all to enjoy. Not only does it have all the vehicles including the boat, pedicopter and bike, but there's 16 levels to play through at 50-75% of their original size, a secret level, all the enemies bar the odd angry jumping fish, and the Janken game is in there too. So at the end of the day if you have a Pico8, you really owe it to yourself to play this fantastic demake which can be played through hardware OR online in your browser!