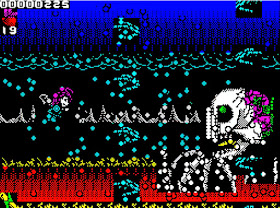 You've got waves of enemies appearing at you from all sides, and there's so many damn bullets you don't know which way to turn. It just has to be a bullet hell shooter, which is coming to the ZX Spectrum developed by keith56 and called Chibi Akumas. Announced recently, this game is going to be heavily inspired by Death Smiles with a horror overtone, it will feature unique levels, different enemies and styles and level bosses all as a free download with a phsyical edition soon after.

Now some of you may recognize this game as the developer had released it previously for the Amstrad taking the bullet hell shooter to a new level with hundreds of bullets on screen for a retro game. What does make the Spectrum version that much more special however is the fact that not only will it have THOUSANDS of bullets on screen, but up to two player action, bosses, and even multi directional control.

So look out for this game as it's coming 26th October as a free download and open source shortly after the physical release ships!