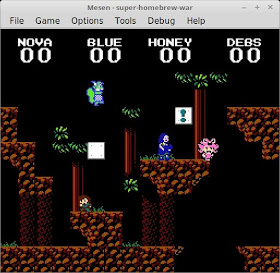 Not interested in bullet hell shooters or top down action games, then how about this cool little homebrew called ' Super Homebrew War ', which is a brand new entry for the NESDev 2018 competition. Unlike the other games we've mentioned this one features up to 4 player combative fun as characters from other homebrew games battle it out to see who's the top fighter! 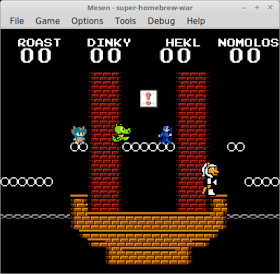 But wait there's more! As according to the description not only can you fight on 8 different homebrew inspired arenas, but the game has Mario style controls, you can jump on each others heads to kill or get new items from blocks, there's multiple items to collection giving different abilities, different game modes such as most kills, AND you can fight CPU players if you don't have three other friends :p.