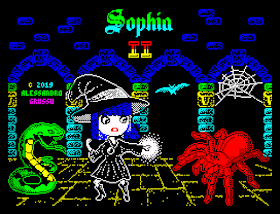 What a week this is turning out to be so far, as if we didn't just have Back to the Future Part III: Timeline of Monkey Island and Dead Zone to enjoy but now we have Alessandro Grussu enhanced remake of Matthew Smith's 48k ZX Spectrum game "Styx" called 'Sophia II' released for the ZX Spectrum! As we said before this is a sequel to the successful Sophia and a remake of Styx while blending gameplay from both games.

Featuring enhanced gameplay, music, sound and lots of attention to detail with both enemies and rooms, Sophia II is available as a version 1.0 for the ZX Dev MIA & Remakes competition. As for the video above which shows us a better look of the game, the developer has noted this is only the beginning of the first level as there is much more to see and do. :-)﻿