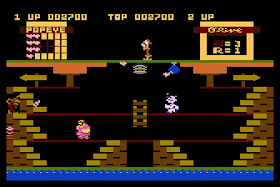 Now here's a blast from the past and no it's not the Amstrad version of Popeye, but an arcade Atari 8bit improvement to the original Atari Xl/XE arcade port of a Nintendo platformer by Parker Bros, released way back in 1982/3. In a similar vein to Donkey Kong albeit not as good, you play as Popeye and must collect hearts, musical notes and the letters H-E-L-P that the lovable character Olive drops from the top of the screen. But be warned, just like the cartoon, Brutus will get in your way with the help of the bad Sea Hag!

If you can avoid being grabbed from above, below or sideways by Brutus, or punch the bottles thrown in your direction, you may just be able to grab a piece of Spinach and turn the tables on the big bully. If you can grab all the items needed, the level is a success and you're on the way to the next! - In regards to the changes however by TIX, Olive sprite has been changed, minor tweaks to Popeye and Brutus, bottle change with Playsoft magic and possibly more detailed in the forums below.