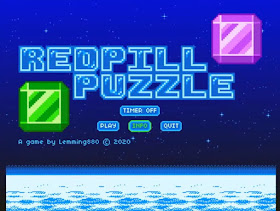 Another Amiga news story to set the evening and no not another platformer, as we've been told by a good friend of ours that Lemming880 has released an updated version of his puzzle game ' RedPill Puzzle ' for the Amiga. In this game developed using RedPill, you must move multiple coloured diamonds around a maze and into a grey square, while avoiding the red diamond which can get in the way ending up in a restart of the level.

As we said before, Redpill Puzzle isn't the most eye popping of games we've seen on the Amiga especially with so many eye candy games coming out, but for what it's worth it's still fun to play and sports a rather nice soundtrack that will keep you going right up until this version of the game ends. So if  you like puzzle games, check it out via the Aminet page inclusive of both an ADF or HD file.