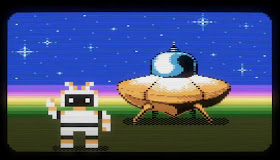 Here on Indie Retro News we do love writing about the Atari XL/XE, especially with fabulous games being mentioned such as the upcoming Prince of Persia port, and the previously released Arcade conversion of Moon Patrol Redux. Thankfully there's no let up in this greatness however, as thanks to a heads up on our main Facebook page, we've been told there's a new game is in development for the Atari XL/XE called Adam is Me; a game that is heavily inspired by "Baba Is You" by Arvi Teikari.

According to the forum post linked below. Adam is Me was initially planned to be released on 8bit "Forever" party in March. The party was cancelled due to outbreak of the coronavirus, which allowed the team to expand the initial scope and the overall polish of the game working on fancy stuff like an extended intro and outro. Furthermore for those of you hoping to get a play test soon, they also go on to say, there is no set release date but there may be a physical released on a diskette... So watch this space!