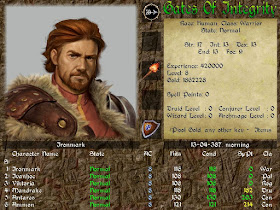 If Zooperdan's hand drawn Dungeon Crawler wasn't to your liking then how about this new game from Tarjan released for the PC(Windows), it's Gates Of Integrity! An impressive love letter and humble tribute to an all time favourite game of mine 'Bard's Tale 1'; a game that was originally released in 1985 for all the popular retro systems of the time such as the Amstrad, Amiga, C64, ZX Spectrum and yes even the NES! 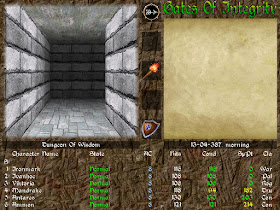 The creator has said Gates Of Integrity is his attempt to recreate the Bard's Tale-ish atmosphere, while making sure the levelling is easier than the original Bard's Tale, but sticking to those old skool roots of saves just in a guild, and keyboard-driven interface such as it was in the 80's. If that wasn't enough he also goes on to say, you might lose quiet a few heroes on your first steps into the dangers of the uknown, and while the atmospheric soundtracks are from Derek Fiechter, the story, maps, dungeons are by the creator himself!