Tiny Bobble - An almost Arcade quality port for the Amiga is well worth playing! (Final Version) 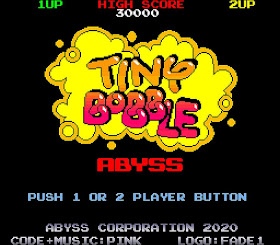 Prepare to have your minds blown once more, especially if you have an Amiga! As after already featuring the beta version of Tiny Bobble, we are pleased to announce that the team of Pink and Fade1, have now released the final version of their almost Arcade like port of Bubble Bobble. Yes indeed for those of you who have been downloading the latest beta versions, will pleased to know that you can keep checking the download link below which will be updated till the final version due this weekend.

Bubble Bobble has infuriated and thrilled us in equal measure on our home computers since its release around the year of 1987 to 1989. Its appeal captures all age groups, and the fun is doubled with a brother, sister or friend to play in two player mode. But now as an almost Arcade like port of that hit classic, you can play the game with 50 fps instead of 25, 32 colours instead of 16, 150 items, a bigger screen height of 224 pixels, more sprite animations, a progress screen, an animated extend screen, and finally multiple endings not using any assets or code from the original Amiga version!