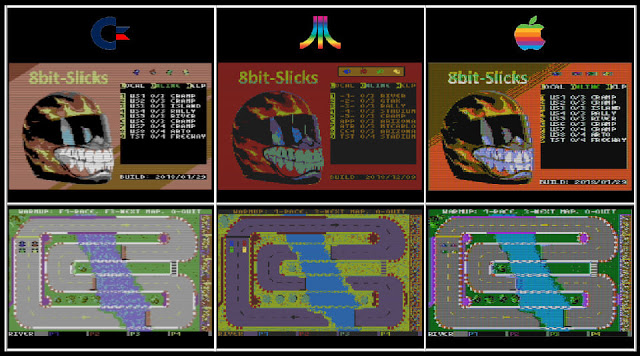 It's been some time since we featured any top down racing games for an 8bit system, usually it's arcade platformers or shoot em ups that grace our computer screens. But thankfully for today that's a,bout to change, as thanks to a heads up in our inbox,we've been told Timo Kauppinen's 'slicks'n'slide' has been given a remake update for the C64 called 8bit-Slicks by 8bit-Dude.  - Other versions still available for the Apple II, Atari XL/XE.

8bit-Slicks just like the original game, is a fantastically fast paced single-screen overhead racing game whereby you can race against other racers through a multitude of ever challenging tracks. These tracks not only differ in design, but some of them don't just feature jumps, but if you get caught in the water it may just slow you down enough to stop you coming first place. Seriously if you have an Apple II, Atari XL/XE or a C64/128 you owe it to yourself to play this latest remake!

New version of 8bit-Slicks is available that fixes scoreboard bugs and improves performance overall (better FPS for all, and shorter load time on C64)
Links :1) Source DefenceForceOrg has also informed us it is also available for the Atari Lynx, Oric 1/Atmos as well as online play.
at Friday, February 05, 2021