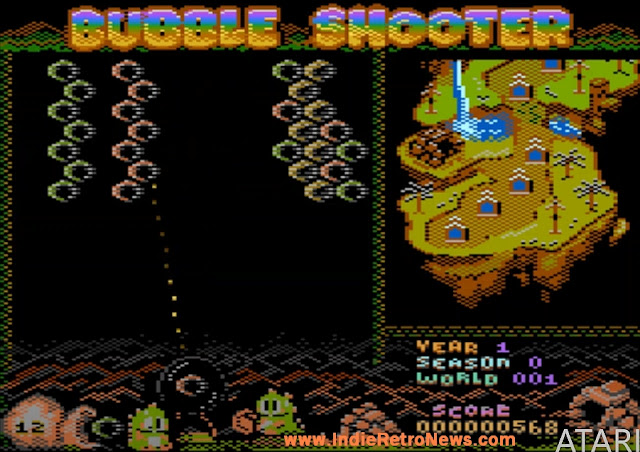 Puzzle Bobble has infuriated and thrilled us in equal measure since its release around the year of 1994. Its appeal captures all age groups, and the fun is doubled with a brother, sister or friend playing to beat each others high score. In fact it even appeared as a clone of Puzzle Bobble which made its appearance on mobiles as a game called Bubble Shooter by Ilyon Dynamics. So why is this game getting a feature on IRN? Well if you have an Atari XL/XE you can look forward to the upcoming Atari 8bit version of Bubble Shooter; a game which blends both Puzzle Bobble and the 2002 clone released on mobiles.

In this game which is being developed by Pajero, Rocky and Miker. The goal of the game is to clear the player screen by forming groups of three or more like-colored marbles. The game ends when the balls reach the bottom line of the screen and the more balls destroyed in one shot, the more points scored. A player wins when there are no balls remaining on the playing field.. So yes very similar to Puzzle Bobble!