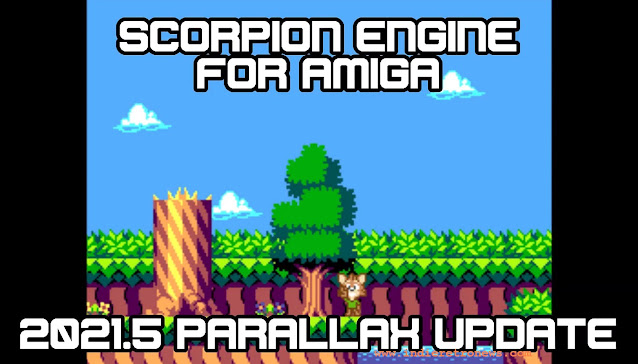 As most of you are aware, there are different ways to create Amiga games, either through Amos, Blitz Basic, RedPill or through the rather lackluster Backbone. But one such game engine is becoming the highlight of nearly every new Amiga game or tech demo announcement, and that's Earok's Scorpion Engine; a constantly updated piece of software that gives developers the tools to create graphically impressive games, running at decent frame rates even on the lowest spec'd Amigas.

You can read a more detailed description of the engine itself (here), but from a nifty piece of software that already had new copper skies for OCS, true colour copper skies for AGA, custom melee hitboxes for enemies and animated blocks. Now features not just a new parallax system which is capable of handling numerous independent slices, that uses only two sprites which leaves all of the palette and hardware sprites for other graphics, but a parallax system that can also be used for an onscreen UI display and much much more, which is seen in the video with Earok's upcoming game Amigo The Fox.