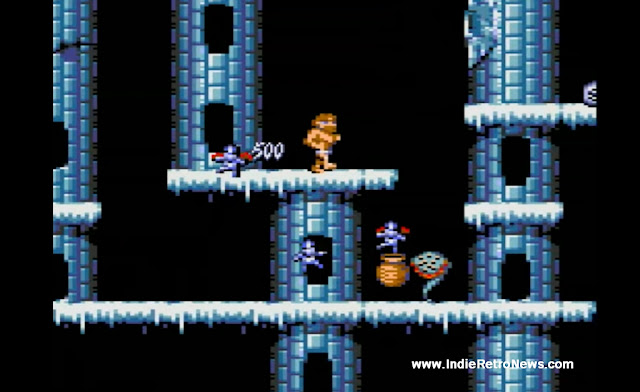 The Amstrad has really set the bar high for 8bit developed games this year, with incredible releases such as AMSTRED, Cosmic Gatlin', Wrecking Ball, and Wireware. But here's one game that I think that will really impress the Amstrad community as a complete overhaul, is the upcoming Amstrad Plus version of Ghosts 'n Goblins'; a soon to be released high quality version of GNG developed by Mathieu Delaruelle aka Hwikaa, Julien Riet aka Ixien and Golem 13.

Ghosts 'n Goblins was a 1985 platformer game developed by Capcom for the arcades and has since been released over the years on several other platforms including the 8-bit such as the C64. It is the first game in the Ghosts 'n Goblins franchise where the player controls a knight, named Sir Arthur, who must defeat zombies, ogres, demons, cyclops, dragons and other monsters in order to rescue Princess Prin Prin. Regarded as one of the most difficult games ever to be released, yet oh so awesome in game play, featured multiple levels, undressing damage, new weapons, bonuses and different suits of armour.

But yet after all that is said, is this Arcade revamp going to be any good?  Well from what we've seen so far compared to the original version released on the Amstrad all those years ago as seen here, this version of Ghosts 'n Goblins for the Amstrad Plus is looking mighty impressive indeed! As a number of members rightly said on the cpcwiki forums when the first announcement was made "The GFX are gorgeous OMAGAAAAA!" and "It is magnificent!"

Link 1) Source Thanks @XeNoM0RPH for the heads up!