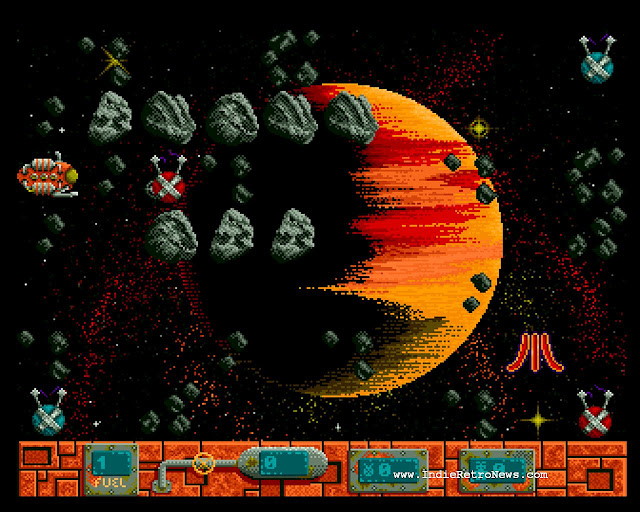 In August 2020 if you were following Indie Retro News you would've seen that Last Minute Creations was not only working on a new Amiga game called 'Atarenium Falcon ' but they also released an early work in progress demo for you to try. Well fast forward to today and we are pleased to tell you that if you enjoyed the demo, the creators have now released the full version! A new game which pits you against the Amigans Empire and their treacherous leader Great Miner. You must reclaim as much coal as possible stolen from Atari Tribe by the Amigans to win the game.
Video Link for Mobile Users
The idea behind the game is simple enough, collect as much coal as possible floating in space, find the robbo's for a story, and get to the Atari Portals with as much coal as you have left. Atarenium Falcon for the Amiga is a very weird game and although the idea behind it is interesting enough and something I haven't seen on the Amiga before, it can get very tedious over time as it is extremely slow paced and requires a lot of thought. So yes if you love slow paced puzzle games, then make sure to check out this latest game from Last Minute Creations
Links :1) Website
at Monday, May 02, 2022