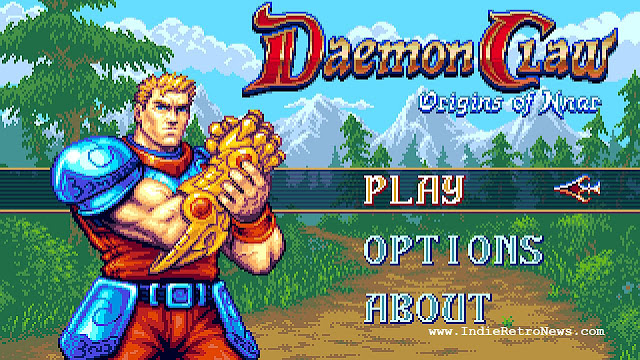 Indie Retro News has been flooded with new updates in our inbox, from new MSX game demos to those released on the Amstrad, Atari XL/XE and the C64 ( Seriously we are still catching up! ). But now thanks to another heads up from Saberman via our Facebook page, he has told us not only is the upcoming Amiga, PC and Sega Mega Drive game of 'DaemonClaw' by BitBeam Cannon still being developed, but he has recently done a gameplay video of the game which can be viewed below.

Defend humanity from a surprise attack by the mystical creatures of the world of Nnar in this side-scrolling action game coming to modern platforms and then classic Amiga and hopefully MegaDrive as well. The game will feature classic 16 bit graphics, fast action side scrolling gameplay, a fantastic original soundtrack by Allister Brimble, multiple enemy types to defeat, lots of different areas to traverse, and more yet to be announced. Seriously this is one game we can't wait to play when it gets an eventual release.