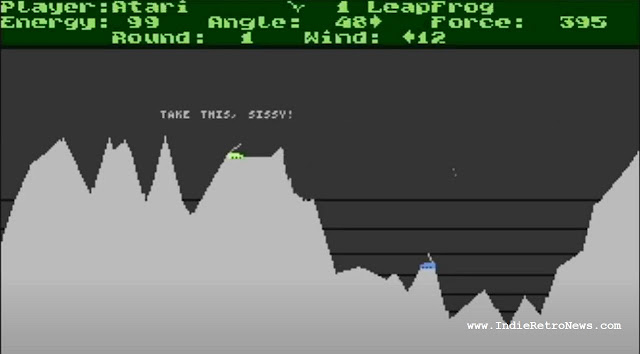 This game might not look like much, with its bare backgrounds and tiny coloured objects, but this is actually a NEW preview Atari XL/XE release, that comes across very much like Scorched Tanks on the Amiga and the MS-DOS game Scorched Earth. Developed by pirx and as a multiplayer game with up to 2 players so far and a huge list of changes listed below. Your ultimate goal is to wipe out your opponent by working out the correct trajectory that your Baby Missile flies through the air and hits dead on target!

According to the Wikipedia for the original game : Scorched Earth is one of many games in the genre of "turn-based artillery games". Such games are among the earliest computer games, with versions existing for mainframes with only teletype output. Scorched Earth, with a plethora of weapon types and power-ups, is considered the modern archetype of its format. Also all weapons are shown with tracers which allow the player to more accurately adjust the trajectory on their next turn!

2022-05-15 Huge internal changes by @Pecus. The whole game screen has been inverted - ground is now background color, "sky" and empty areas are in fact pixels. This allowed for introducing better tank colorization, fully devised and lead by @Adam. The process started and results are already promising - the colors of tanks and the status bar are closer. We might get even better ones in the next builds.