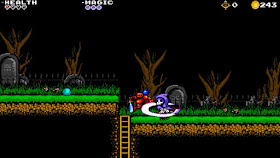 Last year Indie Retro News was one of the first sites to give you a new look at Decemberborn's in development NES inspired 8bit adventure ' Cathedral ', which is coming to PC, MAC and Linux at some point in the near future. It looks to have the brilliance of Shovel Knight and the charm of the retro classics while having cool platforming dungeons, unique aesthetics, new items, baddies to fight and puzzles in a world filled with secrets and side-quests. Well that same game has this month been improved further with a lot of work and updates on the game engine, the sprites and the music, which features in a new gameplay video.


As a note by the developers : Ivystone Ridge is the very first town that you encounter in the game. You end up here after playing through an initial sequence at the Cathedral where the game begins. Once you get to Ivystone, the world opens up a lot more, and we let go of a lot of the linear gameplay. Ivystone Ridge is a kind of hub town, and taking the west exit leads to Shade Forest, a dark and haunted forest that in turn, leads back to the Cathedral (amongst other places).


I must say from the very first moment I saw Cathedral it made my retro gaming senses tingle and now after seeing the improvements, especially in the video above I really can't wait to add it to my ever growing retro inspired collection.