Battle Princess Madelyn - A lady version of Ghouls ‘n Ghosts? I need this! 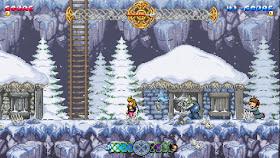 In 1988 Capcom released one of the finest Arcade games ever to grace the gaming scene, and that game was the incredible Ghouls 'n Ghosts, which appeared on lots of different systems. It is a game that if you haven't played it, you are seriously missing out! So as an inspiration to GNG, the developer Casual bit Games has now launched the Steam Greenlight campaign for 'Battle Princess Madelyn', which aims to have the brilliance of that classic, but with great pixel art, a beautiful movie quality sound track, and much more including a female main character!


According to the developers behind this wickedly looking retrotastic title, Battle Princess Madelyn is a game that follows the journey of a young knight in training, Madelyn, and her ghostly pet dog, Fritzy. They set out on a journey to save her kingdom and her family from the clutches of an evil wizard. In terms of the game itself , it is very much inspired by the classics such as Ghouls N' Ghosts and even Wonder Boy 3, and will feature a number of themed areas such as graveyards, swamps, castles and even lush green countrysides, set with beautiful pixel art, great retro gameplay, and plenty of monster killing arcade action! 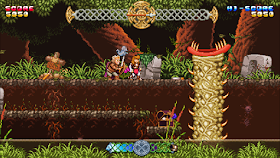 - A mix of fast paced classic arcade action with the adventure elements of classic console games from the golden age of console gaming.
- Amazingly detailed hand drawn pixel art brought to life by the magical lighting of the Unity Engine.
- Battle Princess Madelyn can be played through quickly as an arcade game, or for the full experience stop at towns to help the locals! How you play to complete the story depends on your personal choice!
- Find all of the collectables hidden throughout the stages for extra rewards, and additional hidden stages!
- 10 levels, each of which include up to 5 stages - including 1 or 2 branching hidden stages!
- Fully re-playable stages at any point - if you've unlocked it, you can play it as much as you want!
- Combo meters for destroying and juggling enemies!
- 10 types of weapons which change with the 3 sets of armor found in game!
- Up to 10 unique enemies per level!
- Your ghostly dog companion, Fritzy, gains powers as you progress through the game allowing you to unlock puzzles and otherwise inaccessible areas of stages!
- Special weapons for special occasions! If an area calls for a unique ability, search the area for the needed item!
- An original story written by a professional children's author.
- A story that spans the globe and time! A story told by her grandfather while she is sick, Madelyn will experience life as her magical portal travelling counter part and will save her family no matter where they are in the world.
- Two completely different soundtracks to suit your tastes! Classic Arcade FM/PCM to set the hectic pacing, or Modern Orchestrated to set the mood for the scene!
- Arcade Soundtrack by Gryzor87 of Maldita Castila fame!
- Orchestrated Soundtrack by John McCarthy of Nintendo Quest fame... and more!
- Coming to Consoles + PC(fourth quarter 2017)