The Phoenix Code The Soundtrack - A musical C64 collection from Bonzai 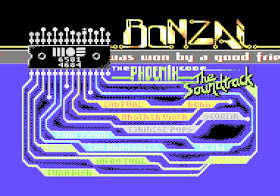 It's a bit of a late hour here at Indie Retro News, but here I am listening to some banging tunes straight out from Bonzai on my C64. This is ' The Phoenix Code The Soundtrack ', a rather recent release that features many of the tunes straight out of the C64 demo 'The Phoenix Code' which came 1st place at X'2016. Contained within the downloaded file is both an animated musical release and also a number of SID files which can be played with a SID Player, 1541 Ultimate or VLC Player.