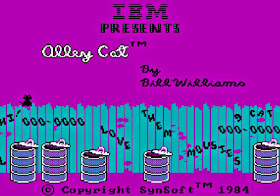 Hello and welcome to Retro Freak Reviews, where we take a look at PC games from the 80s and 90s and today we’re going to take a look at my (and several people’s) 1st PC game: Alley Cat for DOS. Alley Cat was created in 1983 by Bill Williams, based on a concept by John D. Harris and originally published by Synapse Software for the Atari 8-bit computers and one year later published by IBM for the MS-DOS.

But before taking a look at the game, let’s take a look at the box art. Unfortunately, my version of the game came in a simple floppy disk containing several games, which was offered to me when my dad bought me my very first PC. So instead, let’s look at the cover of the Atari version a friend of mine sent me: 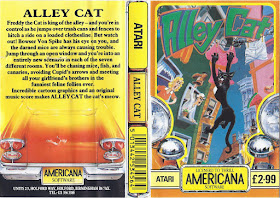 As one can see, this cover shows what the game is about: a lonely black cat against the injustices of modern society. Actually, it’s just a collection of mini-games. And this cat must be the most hated animal around, look at the faces of the people in the windows! Come on, the poor cat is hanging in there for his life! Have some sympathy!

And I just love the title screen and its tune. Check it out!


Even in a PC speaker, this little tune is great! And the title screen is quite nice, with the top score and everything as graffiti. Better than having the title of the game over a black background.

Aaaaaand speaking about black backgrounds, check out the menu screen. It is pretty basic, with the joystick config and the difficulty levels, which I have to admit, naming them after cat names is just adorable.

According to the game description, you control a black cat named Fred and you have to climb trash cans, then a fence, and then hang on clotheslines with mice (who chew on the clotheslines) while avoiding a dog and objects thrown through the windows when open. And your objective is to get inside one of the windows.

Well, you wouldn’t be much an alley cat if you didn’t start in an alley…

In each window there’s one of the several mini-games waiting for you.

My favourite ones are the giant cheese room and the one with the fish-bowl. I mean, look at the size of that cheese! And you have to get the mice that live inside it! Holy Cheddar, Batman!

The other mini-games are also pretty good, especially the one with a room full of dogs, in which the cat has to eat all the food in the bowls WITHOUT waking the dogs. Easier said than done!

And after winning 1 of these mini-games, you end back in the alley, but now, each window that opens; it shows a white female cat calling you out. Cat calling you, if you will.

So again you climb on the trash cans, the fence and the clotheslines to enter one of the opening windows, but this time you enter the most pink and hearty thing I ever seen in my life. Several rows of hearts surrounded by Cupids shooting arrows. Man, even Liberace would say to take it down a notch!

You get the floor dirty with your paws in order to distract the broom from The Sorcerer’s Apprentice but take too long and the dog from the alley goes after you.

The objective here is to reach the top kitten while avoiding the other cats, the arrows and the broken hearts. Fortunately, you can use the present to offer to one of the cats on your path up. And if you fall through the bottom row, the white kitten apparently insults you and end up back in the alley. But if you get to the top cat, they kiss and somehow it causes an explosion of hearts in your computer screen. Not even a St. Valentine’s parade has these many hearts!

And then you go back to the alley, but notice how the setup of the alley changed and you also have gained an extra life. This means you have restarted the game but in a higher difficulty level.

This is known as an arcade style gaming, where you play until all your lives run out. This game has around 30 difficulty levels and basically continues indefinitely until you reach game over. These types of games basically have no ending. Depending how good you are, you can play to your heart’s content.

So, did this game aged well or not? Graphically speaking, and although the sprites and the animations are ok, the CGA graphics didn’t aged well.

The gameplay is still pretty solid and believe it or not, this game was programmed to analyse your computer’s speed and run accordingly to it. Yes, you can run this game in a Pentium PC without using any CPU slowing program. Now that’s impressive!

There was even a fan made sequel called Alley Cat 2, which is more or less the original game but with better graphics, more colours and even some new mini-games, but not as well animated.

But back to the original game: Alley Cat is a fun little game, easy to get into and just perfect if you want to kill one or two minutes of your time, but don’t want to play anything more complex.

Does this game deserve a remake? Yes! It might be a bit challenging for casual players, but an easier remake for smartphones would be perfect! And there are a few remake projects around the internet, but nothing definite yet. And luckily, you can try it in the Internet Archive.

And that was my first Retro Freak Review. How do you think it was? If you liked it, share it and leave your comments below or even a suggestion for future reviews.

Well, see you guys around and remember to keep on playing!