MB03+ Ultimate – The ultimate expansion for your ZX Spectrum

From the comes a new super-expansion for all ZX Spectrum models. It is the brainchild of Jan Kucera. Introducing his hobby project: MB03+ Ultimate.

Jan's history with the ZX Spectrum began in a whole ‘nother era, during the Cold War when the was . History aside, technology innovation thrived in the nation. Didaktik produced some of the most notable Sinclair ZX Spectrum clones, many that are collectible and still desired today. In 1986 Jan saw his first Sinclair ZX Spectrum 48K with rubber keys. Soon after He got his own Didaktik Gama (Czech, English). Kucera then upgraded to the grey ZX Spectrum +2 - which he still uses to this day!

One device to rule them all - MB03+ Ultimate

The cryptically named expansion (long story and legacy, too long!), offers some amazing features, many of which have never been combined in this particular way before. It aims to offer integration of all ZX Spectrum expansions and interfaces into one device.

Sure, individually we have seen mass storage devices, sound card expansions, mouse adapters, joystick interfaces and video output adapters, etc, before. But the ZX Spectrum only offers one ZX Bus in the form of the edge connector. The MB03+ Ultimate to the rescue! Inside its very powerful FPGA, which implements all the devices virtually, side by side, all running at the same time. Thus in one expansion, one single physical device plugged into your ZX Spectrum, you can have all the expansions that you ever dreamt of. Not bad.

And what's even better, its large FPGA still has plenty of room left for further virtualizations. So far only 25% of its capacity is utilized. Let the development begin.


-        General Sound. Sound interface which allows you to play a smaller selection of games with sample based music and effects. (partial list of GS-supported games here). You can also use it to play .MOD-files, a popular sound-format known from Commodore Amiga and PC. As all devices exist side by side, you can easily launch a MOD-file and let it play in the background while you’re playing your favorite ZX Spectrum game.

-        DivMMC. From the boot-screen you can choose to jump right into regular DivMMC with ESXDOS. For your convenience there are two physical micro sd-slots in the MB03+ Ultimate. Or, instead, from the boot-screen, you can choose to boot into BSDOS and access the CF-Card in the physical CompactFlash (IDE) card slot. There is also an ESXDOS for DivIDE, which can also be used to access the CF-card. ESXDOS even has support for DMA (direct memory access) file transfer on both MMC or IDE. Advanced users can switch between BSDOS and ESXDOS via two simple OUT commands.


-        Mini-jack stereo sound output. You take all audio from here, while you grab the picture from your normal ZX Spectrum video output, be it RF, composite or RGB (depending on your ZX model and modifications). The virtualized sound expansions won’t automatically be routed through your video connection, as they only exist in the MB03+ Ultimate. So audio out must be taken from the mini-jack. (Digital video output is currently being developed, more on that further below.)

-         Two USB-ports. One of which you can plug in a standard USB-mouse that then acts as the somewhat widespread Kempston Mouse Standard (partial list of mouse-supported games here). The other USB-port can be used to interface with a PC. Further future uses of the USB-ports (USB2.0) are possible, such as USB-joypads and keyboards.


-          MB03+ Ultimate is powered by the ZX Spectrum! No need for external power supply unit. This is a huge plus in my humble opinion, as there is nothing more annoying than expansions that requires their own PSU.


-          Additional features: Optional Wi-Fi module. Theoretically it should be possible to do a over the air (OTA) firmware upgrade without the use of a PC. IRC (inter relay chat) and file downloads (games, let's be honest..) are also a very distinct possibility. Check out some of the Wi-Fi developments here.  Note. The Wi-Fi module is optional. The wifi module can also be replaced with an UART – RS232 module.

The MB03+ Ultimate comes beautifully packaged. Every accessory is included in the package, and the unit comes fully loaded with both micro SD-cards and CF-card. There are printed manuals, USB-mouse, to HDMI cable, as well as the original packaging from the mass storage cards included. It is a true delight to unbox the wealth of extras.

The MB03+ Ultimate comes housed in a beautifully 3D-printed white case. The texture of the case, as well as the three physical buttons, ‘Reset’, ‘Extra’ and ‘NMI’, has an unparalleled quality to them. Often, in my experience, 3D-printed cased can look like ridiculous melted cheese, but this team have used a top notch high-end 3D-printer. The raised logo and design is also of a particular good quality. They don’t cut corner in the quality department.

Gimmicky or not, MB03+ Ultimate has a LED Matrix consisting of an 8x8 dot grid. On boot you get a nice greeting message rolling across the display. And during normal ZX use, it functions as a VU-meter. I’m not into kitsch, or for that matter putting LED strips into my PC etc, but the LED Matrix ended up giving everything that extra punch. In other words; I loved it.

MB03+ Ultimate is in very active development. Here are some of the plans for the future:


-          Digital video output through its built-in display port. Through the included to HDMI cable you can hook the MB03+ Ultimate up to a regular HDMI-display. Upon reading the development blog progress is looking good, and at the time of writing HDMI works on 128k/+2/+2A/+3 and Harlequin128 2D. ULA+ mode will also come along with the launch of digital video output, as well as text mode and modes from the SAM Coupé. It is planned to be easy to use through a simple setup application.

-         The MB03+ Ultimate team is working together with several partners. ESXDOS-creator Miguel Guerreiro of Papaya Dezign is working on expanded ESXDOS features, such as the long awaited long file name (LFN) support. Busysoft is developing a new BSDOS, which is a Czech disk operating system (DOS).

The manual, which is being updated steadily, forces you into the different areas of the MB03+ Ultimate. It was pedagogical, and trying out the different features was very interesting and a fun time. BSDOS isn’t exactly my preferred mode, I much prefer using the joystick to select stuff from menus, like in ESXDOS, but it did seem like a really solid DOS. Jan Kucera explained to me that ESXDOS is handy for running games and demos, whereas BSDOS is more useful for coders and developers. BSDOS is twice as fast, and  it has a rich software library.

My personal absolute highlight was playing the game Batty (breakout clone) with a mouse, while enjoying the digital audio from the game. Playing mouse-supported shmups comes in as second most fun. I will find it hard to ever go back to playing these games with joystick again! (Amazingly many new games are released with mouse-support, just check out the releases from Yandex Retro Games Battle 2019!)


If you can afford an MB03+ Ultimate, then of course I would recommend anyone getting one. In all honesty, and I’m not being paid to write this, but it is the ultimate ZX Spectrum expansion. At the time of writing there are 15 in stock.

Transparency
I didn't purchase the device, but was kindly lent a unit for review. I am a basic ZX-user that likes to play games and watch demos. I can't code, and I'm ignorant to many of the additional great features that MB03+ Ultimate offers users, hereunder Z80-DMA, DivIDE, MBIDE, math co-processor LCU and much more. I’m sorry, but I am who I am, and I won’t pretend to know what they actually do. Real hardcore ZX Spectrum tech experts will eventually have to cover those features in future reviews. I’ve only personally tested the MB03+ Ultimate on a Harlequin 128 2D board, with a 128k ROM and kempston disabled.

Here are the hardware specifications taken from the main website:

* Optional WiFi ESP8266 - wifi module. (Two coders are currently working on software for the wifi-module. At the moment of writing this, it is possible to download files from HTTP-servers, synchronize time and communicating with the module via AT command. They plan to use Spectranet servers for software downloads.)

* Compatible with other systems, like Residos in the MB02+ mode 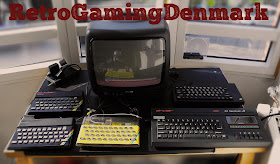