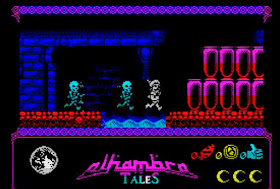 Throughout 2019 we had so many ZX Spectrum games being announced or released you'd think the ZX Spectrum was back in Dixons hopeful for a mass Christmas sale. Games such as Nixy and the Seeds of Doom, Ninja Gardening Simulator, The Hair-Raising Adventures of Mr Hair, and All Hallows were just some of the games we mentioned. Thankfully it looks as if 2020 is going to follow suit for the speccy, as this week former graphic designer from Dinamic 'Raúl 'Ortega Palacios', had announced the development of Alhambra Tales for the ZX Spectrum! - Also coming to the Amstrad too...

Although not much is known about the game so far other than the early development twitter tease for both the Amstrad and ZX Spectrum, Alhambra Tales looks to be a platformer in which you must collect items while avoiding deadly creatures and traps such as Skeletons and watery depths. And that's all we know so far, but for further info keep checking the Twitter feed above.