Jetman - The complete published works all in one book! 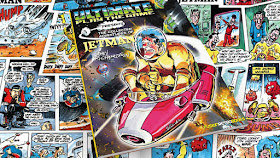 When you hear the name Chris Wilkins of Fusion Retro Books, you can't help but think of great reading material such as The story of the Oliver Twins, The story of the Commodore 64 in pixels, Fusion, ZZap! and even the Great Crash Annual to name but many he's pushed through a successful Kickstarter. But now yet again he's hoping for another golden success, as through an early update in our msg box, he has told us a Kickstarter has been launched for the Jetman - The complete published works all in one book! 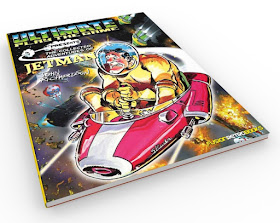 As noted by the Kickstarter "Crash magazine was the staple diet for the ZX Spectrum gamer in the 1980s and early 1990s. Within its many pages readers could find reviews of the latest games as well as topical features and regular slots like Hall of Fame and the Jetman strip. A deal had been cut with Ultimate Play the Game - a company riding high at the time with release such as Jetpac, Cookie, Psst and Lunar Jetman where the late John Richardson was commissioned each issue by Ultimate to produce a 1-page comic strip on the adventures of the intrepid hero of Jetpac and Lunar Jetman - Jetman". For the first time ever, the complete collection of John Richardson's Jetman comic strips will be available in hardback or paperback and is to be called The Collected Adventures of Jetman. 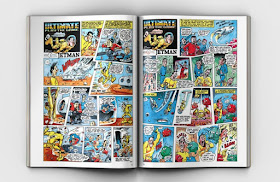 Yes indeed Jetman is BACK! Not only is Jetman back in style, but he's getting his very own 96 page book, all in glorious detail and physical size to that of the Ocean/US Gold book also produced by Fusion Retro Books. Furthermore not only will it come in 2 lovely flavours a paperback version with Jetman on the front cover embossed and a hardback version with a high gloss dust sheet, but this is all through the good graces of Future Publishing who still own the rights to the Crash Magazine! - How cool is that?

So if  you are interested, head on over to the Kickstarter page, check out the perks and make sure to kickstart it to a success of £10,000!