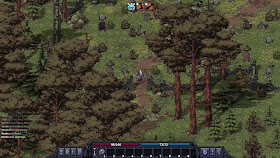 Are you looking for a new game to play that's not only an RPG but it has a big open world to play on? Then you might be interested in playing 'Stoneshard'; a game which is a new release from HypeTrain Digital that's available to play through Early Access right now! This game is a challenging turn-based RPG in which you will experience the unforgiving life of a medieval mercenary: travel across the war-torn kingdom, fulfill contracts, fight, mend your wounds and develop your character without any restrictions.


Stoneshard is inspired by legendary classic titles such as Diablo and ADOM and modern games like The Banner Saga and Darkest Dungeon. The game features a huge procedurally generated medieval world, dangerous areas to traverse such as abandoned villages and dungeons, an economy accepting contracts, treasure hunting and trade, character development, loot, deadly enemies such as vampires, the undead, mercenaries, over 100 weapons, and far more to come when the game is out of access and released into the wild!