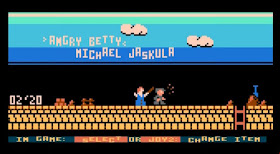 If you're looking for a new game for your Atari XL/XE, then you've come to the right place. As thanks to a heads up from Saberman, we've been told Michaeł Jaskuła has released his new game for the Atari 8bit called ' Angry Betty '; a game that was created using Mad-Pascal, that can be played on real hardware (64kb, Atari XL/XE series) or any Atari emulator such as Altirra or Atari800Win.


As noted by the description : The player must dig through dirt collecting money (gems) and later spending as much as possible to build a new house for him and his wife Betty. Every next floor costs $100 and money can also be spent on better items, such as pickaxes in the nearby store. Certainly an enjoyable game, that I hope will be developed even further down the line.