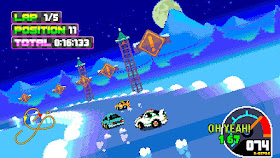 I'll say it now, this in development game from @SandwichColonel and @skydevilpalm looks super cool! As if you loved playing the Sega classic Power Drift from 1988, then you'll be pleased to know this game looks to be an unofficial spiritual successor. Although the game is still being created using gamemaker, the person behind the game has announced you can now download an early playable version before a Kickstarter is launched down the line.

From the animated gif above, Victory Heat Rally looks to feature great animation, fast paced gameplay and graphics ,giving the impression of a game released all those years ago. As the description says " Drift your way to the finish line in this fast paced arcade style racer with super scaler aesthetics! ".