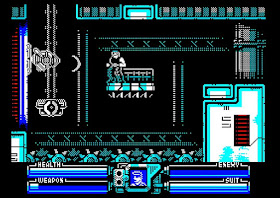 As we said before, in 2018 we gave you the heads up of a seriously cool looking ZX Spectrum game called ' Power Blade - Delta's Shadow ', which is in development by n1k-o@nq_skrju and team as a top quality inspiration of the same name which was originally released in the early 90's by Taito. Well there's great news to start this month! As thanks to a heads up by ZX Dev, we've come across some brand new footage showing just how good 'Power Blade' plays, looks and sounds!


If you were lucky enough to get a ZX Spectrum Next or own a ZX Spectrum at home, then this game with its high grade gameplay killing enemies with a boomerang will most definitely be the game for you. It doesn't just feature development by Alexander “SancheZ” Udotov who created the incredible Castlevania Spectral Interlude and the Mighty Final Fight port, but it also has great ZX Spectrum and ZX Spectrum NEXT graphics, super animation, deadly traps and nasty enemies and addictive gameplay!