The Pit - 1982 Arcade game gets a ZX Spectrum conversion release! 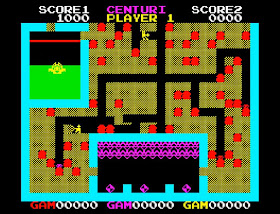 Thanks to a heads up in our ZX Spectrum group, especially if you're looking for a new ZX Spectrum game to play. As we've just been told by Dave Tansley, that he has now released his ZX Spectrum game of 'The Pit'; a conversion of the 1982 coin-op, which as the creator notes, is an annoying little game which somehow never got ported to the Spectrum (it got a C64 port) and which he finds oddly enjoyable.


The Pit is very similar to games such as Boulder Dash, in which a player must dig around a level while avoiding enemies and being crushed by boulders. What makes this Arcade game more unique however and just as enjoyable. Is the fact that not only do you need to collect diamonds in a Pit, but you must also avoid being struck by falling arrows, you can use a weapon against enemies, there's a spaceship you need to return the Diamonds to, and there's a platform that will cause you to fall into a pit of green stuff!