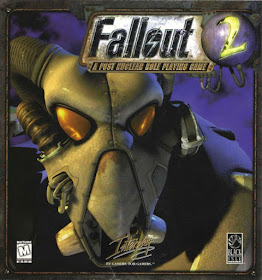 Fallout 2 takes place in 2241, 80 years after the first game, and 164 after the Great War. You play as a Chosen One, a descendant of the Vault Dweller. After being forced to leave the Vault 13, Vault Dweller headed north, never to be seen again. However, Vault Dweller was joined by several residents of his Vault, and they founded a village Arroyo. In 2241, a horrible drought has hit Northern California, and the village is dying. To prevent the disaster, the village Elder, asks you the Chosen One to go out into the wasteland and find a G.E.C.K. (a Garden of Eden Creation Kit). The G.E.C.K. is a piece of pre-war technology, that can revitalize areas of the wasteland.

Before you are sent on your quest, you must complete the test, by visiting the Temple of Trials. The Temple of Trials is basically a tutorial section used to familiarize new players with the games. The only problem with this is that it cannot be skipped, forcing you to complete the Temple of Trials, every time you start a new game. One of the flaws of Fallout 2, is that it starts slow, and it will take some time until you get your first gun. Fortunately, after the first two starting areas, the game begins to open up, and the real adventure starts.

Fallout 2 is less focused on its overall plot, and more focused on side quests and stories. You can still lose the game, by not founding the G.E.C.K in time. This, however, is very hard to achieve, and can only be done if you take too long, which is hard to do. There are a lot of unmarked side quests (the quests that aren’t marked on your Pip-Boy), and most of these are quite simple. They usually involve finding someone or something, rescuing someone, and others that will not impact the ending.

The real difference between the two games is that quests are now connected and involve more communities and people. For the most part, the quests will involve you traveling to other communities and solving problems, either diplomatically or covertly. The way you solve quests will have an impact on a larger scale and will affect the ending. For instance, the endings may be directly influenced by your actions elsewhere. This all adds a lot of flavor to the game, and the problems you encounter have a larger scale like pollution, organized crime, slavery, expansionism, etc.

There are also several gameplay changes in contrast to the first game. The most important one is that now you have more control over your party. For one, you can now recruit more people to your party (up to 5), and some of them are pretty unique. You can recruit a mutant sheriff, a ghoul doctor, even a cyberdog. One of the biggest changes in Fallout 2, is that you can now issue party commands, and now you can instruct them to use their best weapon, armor, and disposition. This can vary from: aggressive, berserk, defensive, coward or custom. If they ever block your way, you can simply push them, or change their distance to your character. Party members can be discharged at any time, but some NPCs can join your party regardless of the party limit. These are usually these are temporary companions or worse unwanted companions. Also, there are far more perks, but the ones from the previous game are still useful.

Fallout 2 offers you to do more awesome and in some cases sillier things. In Fallout 2 you can own a car. Yes, your very own Chryslus Highwayman. There is a quest, that lets you find parts and repair the car, so you can travel much faster in the wasteland. You can also take part in underground fights, star in adult movies, have a shotgun wedding, and even sell people into slavery. The game is also full of pop culture references and Easter eggs. There aren’t many Film and TV show stats starring in the game, and the “talking heads” are usually reserved for plot-relevant characters. 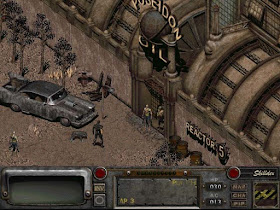 The game is not without problems and bugs, however. Random encounters are slightly more difficult, and big fights can become boring. Some encounters may feature groups of NPCs (both hostile and non-hostile) and this is slow as they were in the first game. To reduce this, you may want to select the fastest combat speed. There are also a lot of bugs in the game. Some of this may include: not crossing out complete quests in Pip-Boy, the car not being rendered, and many minor bugs. This was eventually fixed with the use of fan patches, and fortunately, they are easily available.

Fallout 2 was a success, and one of the most popular Western RPGs, and was featured on several lists of top video games. In the US, the game sold around 123,000 copies by March 2000. The game is easily available on both Steam and GOG. I wholeheartedly recommend this game, and see why it is so fondly remembered by many gamers, and why the game has a such a huge following.