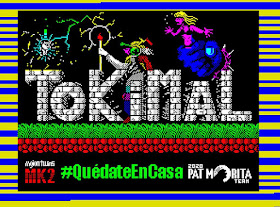 As we said before, Toki was and still is an awesome arcade shooter platformer that was released way back in 1989 by a designer by the name of Akira Sakuma for many different systems such as the NES, Sega Mega Drive, Atari Lynx, Atari ST, Amiga and Commodore 64. In it you played as an enhanced Ape transformed from a Human that could shoot energy balls from his mouth defeating strange creatures and finally defeat an evil Wizard. If you remember this truly great game, you'll be pleased to know that once again Pat Morita Team, has teased a new footage update for their upcoming Toki inspiration which is coming to the ZX Spectrum at some point in the near future.


TOKIMAL by the Pat Morita Team is a free interpretation of Toki for our Spectrums, as a clear tribute to the Mojon Twins, which in itself was inspired by the Gaelco Thunder Hoop machine. Furthermore the game is not only at a playable state while still in Alpha (As seen by the new footage above), the game will be playable through five different stages designed for the ZX Spectrum 128k as well as programmed with MK2 featuring many modifications by the Pat Morita Team!