POLAR BEAR IN SPACE! - An Action packed game from Unrolled Loop Studios LLC is coming soon to a C64 near you 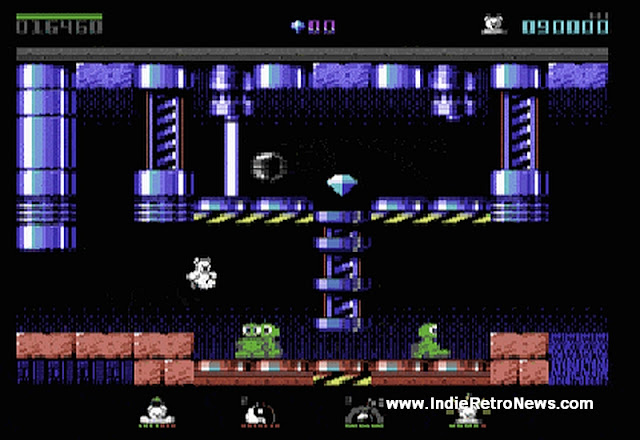 The C64 news just keeps on coming, as if Muddy Racers wasn't enough to whet your appetite, then you might be interested to learn, that Psytronik Software in association with RGCD, will soon be releasing the C64 game of 'POLAR BEAR IN SPACE' developed by Unrolled Loop Studios LLC; an absolutely stunning debut release, in which you take control of an extremely cute Polar Bear in his quest to run, jump and zap through various alien-infested levels whilst collecting krystals.

The game does look to contain a lot of flashing, which hopefully can be turned off (VIDEO LINK)
Polar Bear is stranded in space! Having found a nearby alien space station on his quest for home, he must now locate the secret underground transporter and collect the 99 krystals needed to operate it. Only then can he escape! The game will feature a super-slick presentation, an incredibly cute main character, platforming and space shooting action, superb soundtracks, support for keyboard and two/three-button (POTX/POTY) controllers, TheC64 Mini/Maxi compatible, and finally coming as a digital download and boxed edition soon.
Links :1) Source NOTE: This game is suitable for PAL systems only. 2) RGCD
at Tuesday, July 27, 2021