QUOD INIT EXIT IIo - The sequel to a colourful C64 game gets a BIG preview for you to play! 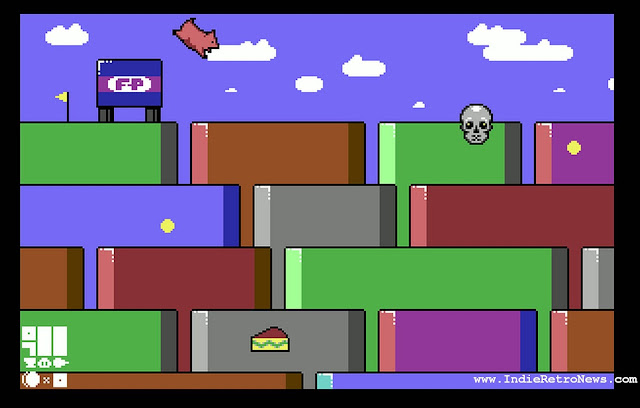 In 2015 we gave a special mention to Retream's Arcade homebrew of ' QUOD INIT EXIT ', a C64 game that had a cute little pig, lots of fast moving fruit and was so colourful you would've been silly not to load it up on a C64. Thankfully it looks as if the team want to continue the piggy greatness, as not only is there a sequel still coming of which we featured previously, but Retream has contacted us today, to let you all know that after more than 2 years, a new and massive playable preview has been released!

When we featured QUOD INIT EXIT IIm which is the minimal-sized (16 kB) sequel to QUOD INIT EXIT, we said that the game was overall a fun, quirky, beautiful and difficult, but extremely addictive brand new game for your C64. Well if you loved QUOD INIT EXIT and it's smaller sized sequel, you'll be pleased to know that this version of the game as llo  is not only a much bigger game, but contains new enemies, traps, food to collect and more you'll just have to experience in this awesome new preview from our good friends Retream.