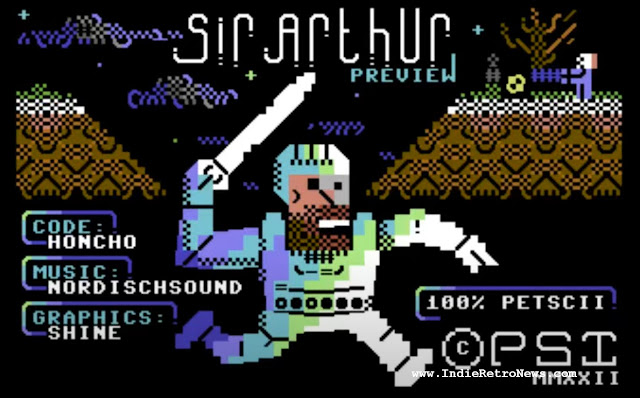 Way back in 1985 Capcom released the start of one of the greatest side scrolling platform game series we have ever known. It featured a knight, creepy enemies, lots of graves and was extremely difficult to the point of frustration. The game I am talking about is of course ' Ghosts 'N Goblins ', the first game in the Ghosts 'n Goblins franchise which appeared on many different systems such as the Amstrad, C64 and even the ZX Spectrum. So for those of you who remember playing the game, may interested to know that we have just found out that Honcho, Nordischsound and Shine is working on a Ghosts 'N Goblins game for the C64 made in PETSCII called 'Sir Arthur'.

If you loved playing the classic game of Ghosts 'n Goblins or Ghouls 'N Ghosts, then this latest preview of the game for the C64 is pretty damn cool as not only is it a great nod to the classics, but think of it as a demake while made in PETSCII. Sadly I wont be able to do a longer feature article on this game as not only is it nearly midnight, but I'm knackered from all the writing this week!