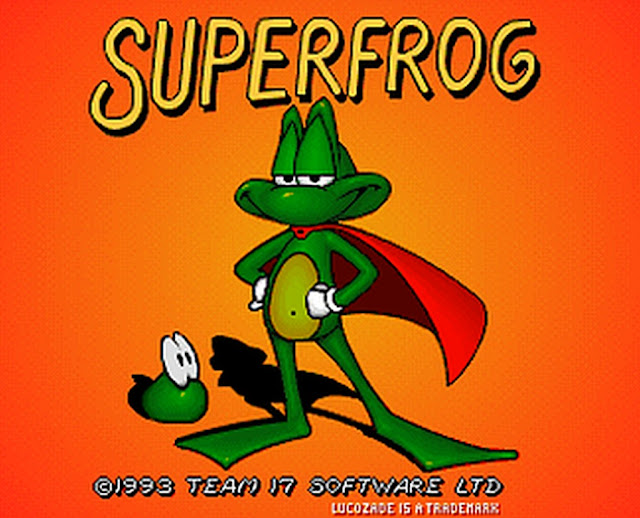 In the 90s there were really only two platform games. There was Mario, or there was Sonic. Opinion was divided as to which was the best, but it was rare to find someone in both camps. Me? I was a Mario man, preferring the challenge of the slower pace, picking your way through a level carefully, over the manic, ‘charge through as fast as possible’ methods, normally employed by those that preferred their gaming characters to be blue and pointy. 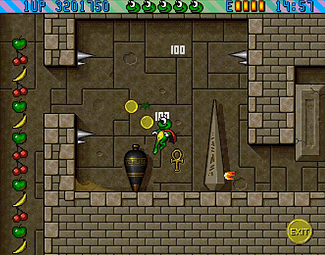 As both were exclusives to Nintendo and Sega respectively, Amiga owners didn’t get to play with either. There were endless platform games released for the ‘mig over the years, but none really came close to recreating the magic that Mario and Sonic could provide, except, maybe, this one. 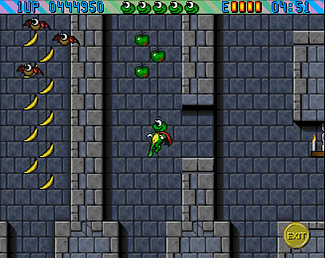 I realise that may be controversial. Upon reading that rather bold assertion there will be those proclaiming the virtues of the likes of Gods, Assassin, Zool, Robocod and more. But while all solid games in their own right, none captured the cartoony feel, gameplay and the consistency of level offered by Superfrog. 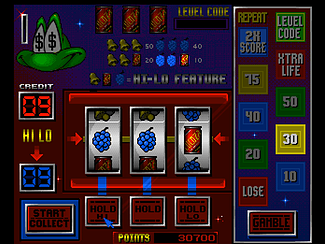 Superfrog, in case you hadn’t already guessed, is a 2-D platform game. It was released in 1993 by Team 17, who at this time could do little wrong, riding the wave of successful games such as Alien Breed, Project X and Alien Breed 2. The hero is a prince who has been turned into a frog, on a mission to save his princess, who has been kidnapped by a witch. Ok, so no prizes for originality and in truth that is a theme for the whole game. You have seen it all before. It’s just this time it is all done very, very well.

At the start of the game the frog is turned into a caped ‘Superfrog’ after drinking Lucozade (yes I know, it was an early commercial tie in, and I didn’t like it either). You work your way through different lands: Forest, Castle, Circus, Ancient Egypt, Ice Caverns and the Interstellar Base, with four levels within each to negotiate. Your frog can run and jump, the jump being nicely controllable even in mid-air. You have a friend; ‘spud’ the potato, which you can fire at some enemies to dispose of them, and you can pick up ‘frog wings’ allowing you to flap your way to previously unreachable parts of a level. You have four hit points, a brush with an enemy will deplete one, while landing in a spiked pit will result in the instant loss of a life. Periodically you will find bottles of Lucozade (nnnngh – product placement again!) which will top up your health, and that’s about it. You work your way through each level, avoiding the bad guys and spiked pits, collecting fruit and gold coins, a certain number of which are required to open the exit to the level. Pretty standard platform fare, so why is it special? 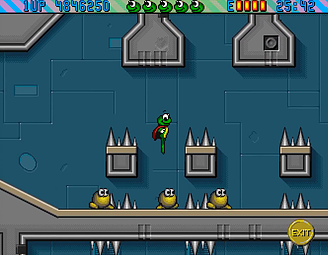 Well for a start it looks phenomenal. Team 17’s games always look good and this is no exception. It is quite beautifully drawn with each level having its own distinctive but spectacular appearance. The animation is pixel smooth, aesthetically significantly head and shoulders above most other Amiga games at the time. When you compare it with its rival titles it genuinely has the look of something running on a more advanced platform. It sounds great too, with nice sound effects and really catchy music that you will be humming hours after playing.

Each level contains one or more hidden areas which contain lots of bonus items, including coins and fruit (of course). The more you collect the more spins you get on a slot machine which is accessed between levels. Prizes include points, extra lives and level codes. The gameplay is hard but in general is scrupulously fair; this is a game that takes a lot of dedication and plenty of hours’ commitment to make significant progress. The levels offer the opportunity to explore vertically as well as horizontally, as opposed to the Mario and Sonic games of the time which were predominantly linear left-to-right affairs. The level design is very good and it is rare that you won’t know where you are supposed to be going. Of its two rivals, I would consider it much closer to Mario than Sonic. Rushing through the game will only result in a premature demise. For the most part, care is needed. There are occasions where a ‘speed-up’ pill will allow you to hit the turbos and zoom along impressively, but a ‘slow-down’ equivalent will always appear a short while later before the next danger looms. 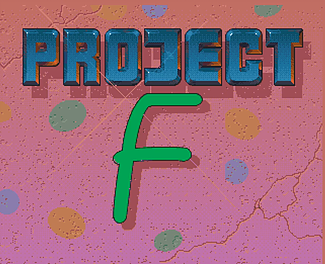 Rather amusingly, to make it to the final Interstellar base level, you enter a ‘Project F’ section where you fly through space using a jet pack and armed with a blaster, in a nice nod towards ‘Project X’, Team 17’s ‘shoot-em-up’ offering from the year before. 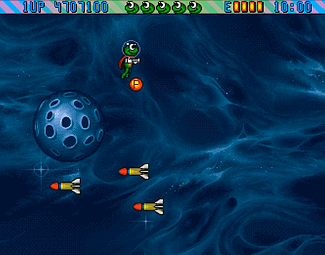 Now, for balance, I need to list some negatives and in truth that isn't easy. I suppose the instant spike death can be frustrating and there are a few secret holes which can open beneath you without warning, dropping you to a point much earlier in the level which is undoubtedly irritating, especially when you are caught out for a scond and third time.

But that’s about it. I’m really struggling to think of anything negative to say. Make no mistake, this is a fabulous game. It is finely crafted platform fun which looks stunning and plays exceptionally well. I personally rate it as the best platform game on the Amiga with only Gods coming close. In my humble opinion it buries Zool, Robocod and Assassin, by having real character and identity, something that was lacking in those titles despite their efforts to stand out.

Is it a Sonic or Mario beater? Well no of course not, but it comes much closer than some may have expected. In fact I am going to fire it up again now…