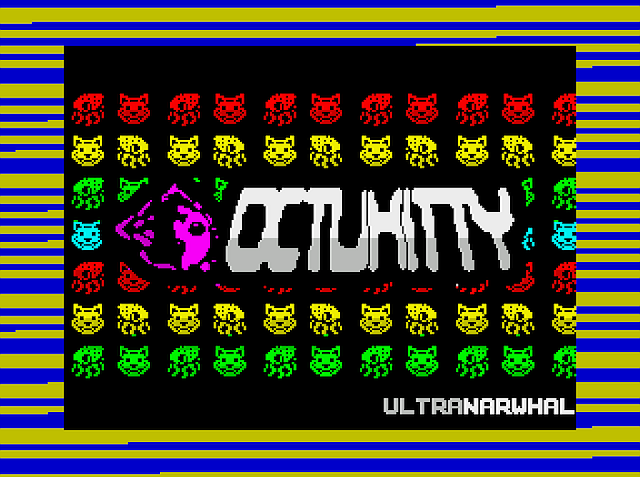 If you're not content with playing Amiga games or C64 Shoot em ups, then how about UltraNarwhal's ZX Spectrum release ' OCTUKITTY ', which was released just moments ago and given a heads up through our Twitter page. This game created with AGD by Jonathan Cauldwell and Music with AGD Musicizer by David Saphier, puts you in control of Octav1us on her own personal mission to find her friendly Octopus Squidges. For what seems like an easy task, goes rather wierd as finding a strange door locked with a padlock that required 6 keys in her Garden, she's teleported back to her Bedroom!


Obviously this game by UltraNarwhal is based around the Youtubber 0ctav1usKitten. But it's not often that happens especially with retro games, as you're more likely to find an indie game based around (I hate to say the name) people such as Pewdiepie. But unlike those other games and Youtubbers, 0ctav1usKitten is both worth watching and this game is worth playing. It features lots of different designed rooms each with their own set of challenges such as avoiding enemies in one or using your cat fire button as leverage to reach the top platform, an awesome soundtrack, and the gameplay is highly addictive.