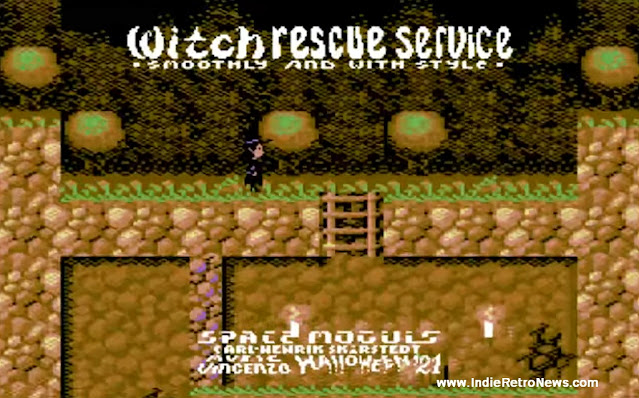 Even more retro games to get through the beginning of the week, as thanks to Saberman yet again letting us know through Facebook, that he has told us that you can now download an early preview v3 of 'Witch Rescue Service';  a rather Witchy C64 platformer from Space Moguls creator Carl-Henrik. For those of you who haven't heard of this game before, it was originally a work in progress title that got such positive feedback as just a one week project to continue development, it has progressed into the early v3 preview you see today.

Even if it is still at an early development stage, with new preview updates including pumpkin bombs, brittle walls, and a new WIP art style. The creator has said Witch Rescue Service will be developed to include more levels and gameplay and bug fixes but in order to have as many player animations as he hopes to include, he will need to switch this to a 512kb cartridge game which will be more of a sequel and a far better game that I'm sure many of you will enjoy.