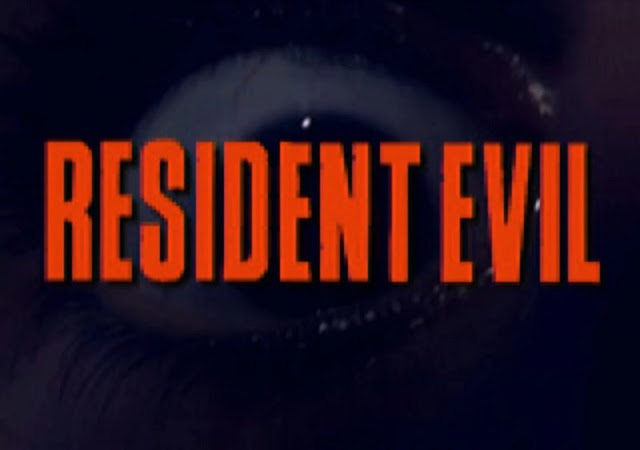 Our perception of ‘good’ and ‘bad’ is strange. Normally in our minds we have a set of arbitrarily defined tick boxes. Cross enough off and something is good. If you have lots of gaps then it is bad. But now and again you find flawed genius. Something that on the face of it has too much wrong to be good, but despite the many faults, greatness still shines through like a beacon. George Best, Michael Jackson, Amy Winehouse, Spike Milligan and Peter Sellers were all regarded as genius’ in their respective fields, even though they all suffered deep character defects. 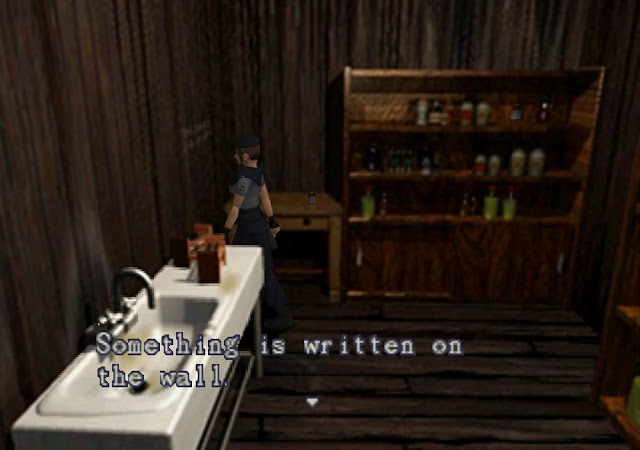 Resident Evil is definitely a computer game that sits nicely within this description. It was released by Capcom in 1996 for the Sony PlayStation and has become their biggest selling debut game. The game kicks off with a brilliantly shot real life ‘full motion video’ sequence that provides a nice back story that explains how you came to be where you are. Set on the outskirts of Racoon Forest you play either Jill Valentine or Chris Redfield, part of the S.T.A.R.S. elite task force sent to find their colleagues who have disappeared. You have become trapped in a mansion overrun by zombies and other monsters, and you have to locate your colleagues and negotiate your way out. 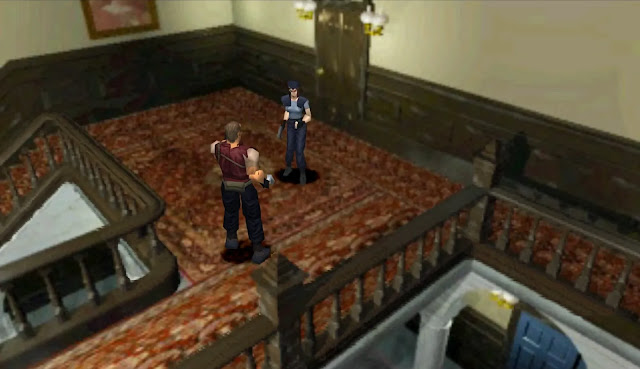 This is essentially an adventure game in three dimensions but, with the addition of those trying to kill you coupled with a great and foreboding atmosphere, it actually defined a new genre in video gaming; that of ‘survival horror’. The difficulty depends on the character you choose. Jill is armed with a pistol, can pick locks and crucially can carry two more items than Chris, who is armed only with a knife. 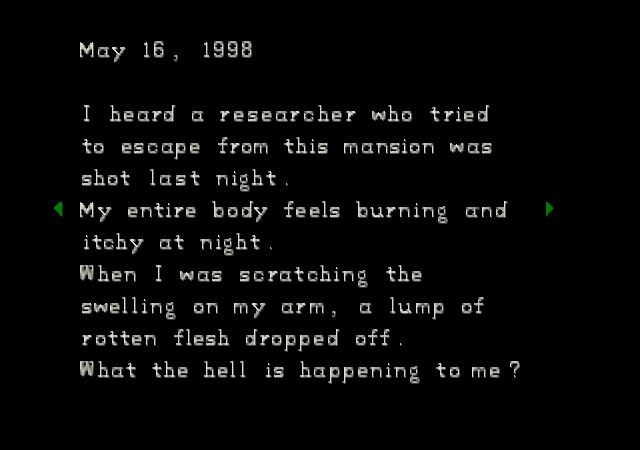 Your job is to explore the mansion, collect items, solve puzzles, obtain keys to open up further areas of the mansion and repeat. As you progress you find various diaries and journals which help shed light on the events that unfolded before your arrival. However, as you investigate, you do so under the threat that at any moment you might turn a corner or open a door and find yourself face-to-face with a zombie, a snake, a giant spider, a rabid dog or any number of other monsters that you must deal with. You can dispatch them with a variety of weapons that you pick up during the game, including a shotgun, a Magnum, a flamethrower and a grenade launcher (that fires both explosive and acid rounds), or alternatively you can simply avoid them. In fact you learn that avoiding rather than killing is often the most effective strategy, as it is very easy to run out of ammunition and this can be hugely problematic later in the game. You can also find and collect other items such as first aid sprays and also three different types of herbs (red, blue and green) which can be combined and used to provide different types of health boosts or a remedy against poison.

This wouldn’t be a fair review if I don’t mention some of this game’s many really quite major faults:

A fairly standard programming cheat is used (common within early adventure games to make them appear bigger than they really are) by placing various puzzle items furthest from where they are needed, so a significant amount of fairly tedious walking back and forth across the play area is required. 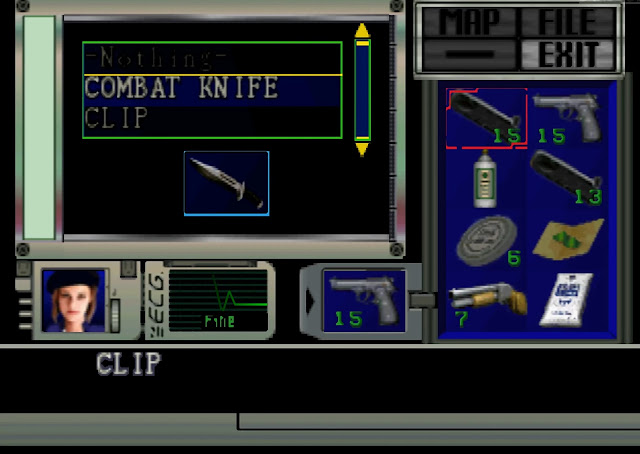 You can only save your progress using typewriter ribbons (which you find throughout the game) and only when you are in a room with a typewriter in it. As these are fairly sparse and death is often lurking close at hand you find yourself having to replay some parts of the game repeatedly, or alternatively retracing your steps frequently in order to save. 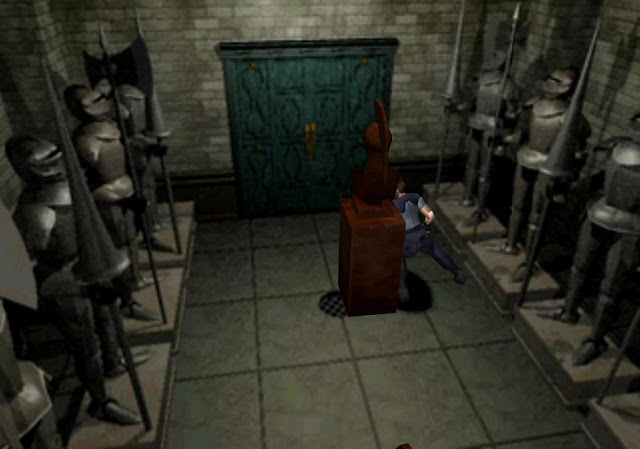 Because it is easy to run out of ammunition, progress past a certain point can become impossible.

Every time you enter a new room or climb a staircase you have to watch an animation of a door opening or the ascent/decent of the stairs, to mask what are some pretty long loading times.

The control system is quite unintuitive whereby pushing up and down makes the character walk forwards or backwards, no matter which direction they are facing. So there are times when you are pressing up to walk ‘down’ the screen which simply feels wrong. 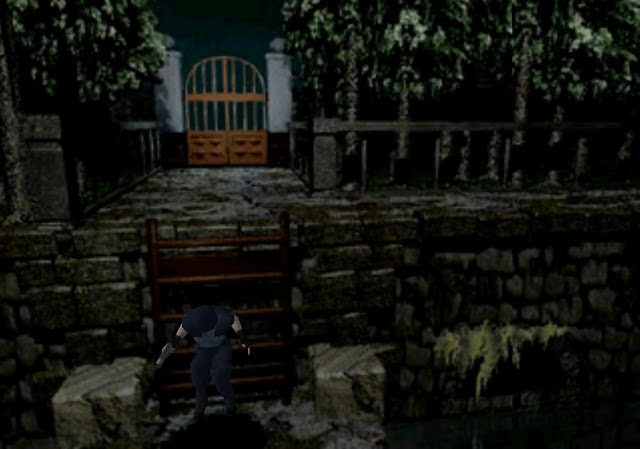 The viewpoint is fixed (imagine that you are watching the action unfold on a series of CCTV cameras) and, as you move about, the view being used can unexpectedly change, sometimes at quite inconvenient moments. If the previous view was from the other side of your character, you will find that when the viewpoint changes the controls will be reversed. This is particularly infuriating if this happens while you are being attacked and you die (and you haven’t saved for a while - see above). 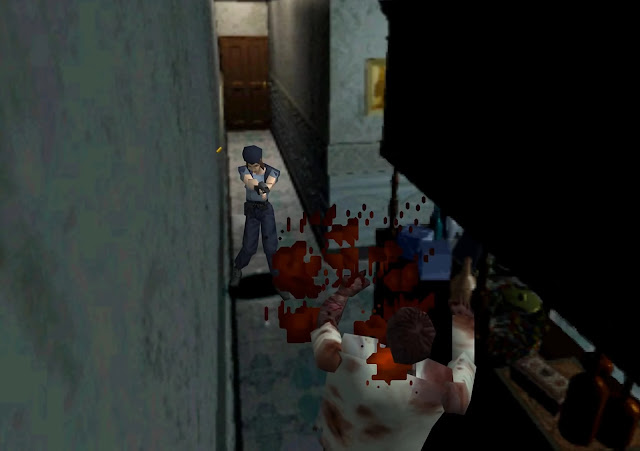 The script and voice acting is shockingly poor, so bad as to be quite amusing. The following are all genuine quotes from the game:

“I'm going to find out what caused Forest's death. It looks like he was killed by a crow or something!”

“It's a weapon. It's really powerful, especially against living things.”

“We should start from the first floor, okay? And, Jill, here's a lock pick. It might be handy if you, the master of unlocking, take it with you.”

So having read that list you would have very good reason to conclude that the game would be nigh on unplayable. But you couldn’t be more wrong. Resident Evil is fantastic. It is hugely atmospheric, being well drawn, with the solid looking graphics often accompanied by chilling sound effects. The mansion feels very ‘real’ and the puzzles for the most part are logical and, while this is without doubt a very tough game, progression is predominantly fair.

But the jewel in its crown is the fact that it is scary. Properly scary. In fact scary isn’t a strong enough word. It is genuinely and truly frightening. Before I played Resident Evil I had never been unsettled by a video game before. But there are moments in this game that gave me as big a fright as any classic horror film I have seen. The first time you encounter the dogs for example is absolutely terrifying. I genuinely shrieked, dropped the controller and of course, died. 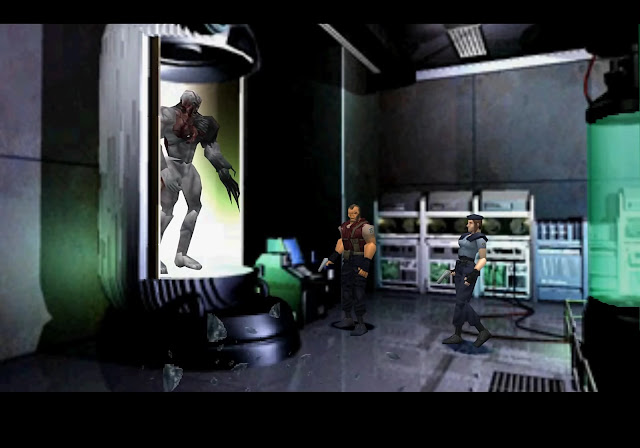 There is one point in the game where you have just completed a long walk back over previously explored ground and suddenly you find yourself watching a cut scene of a giant, angry, frog-like monster taking the same route, right up to the door that you absolutely know that you are standing right behind, with control being returned to your character just as the door is opening. It is very clever, beautifully executed and the effect is petrifying. I challenge anyone to navigate that section without incurring a significantly raised pulse. 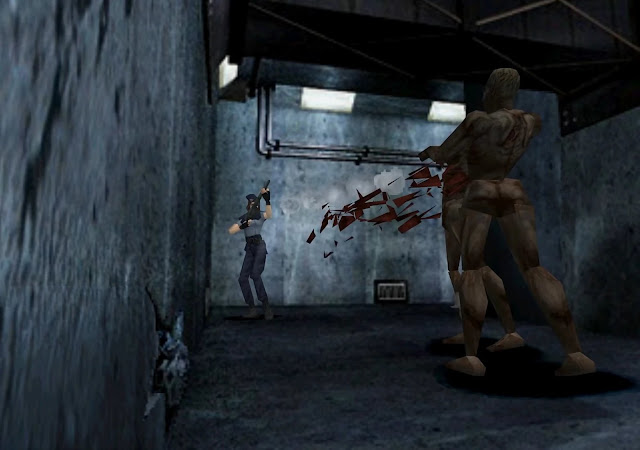 So despite the woeful dialogue and voice acting, the horrible control system, the slow loading screens and the many other quite substantial flaws that blight this game, Resident Evil is really pretty special and against all the odds Capcom have managed to achieve something quite remarkable. They have produced a game that despite being absolutely riddled with faults is still absolutely brilliant.

I genuinely cannot think of another computer game that is so bad that is just so bloody good.