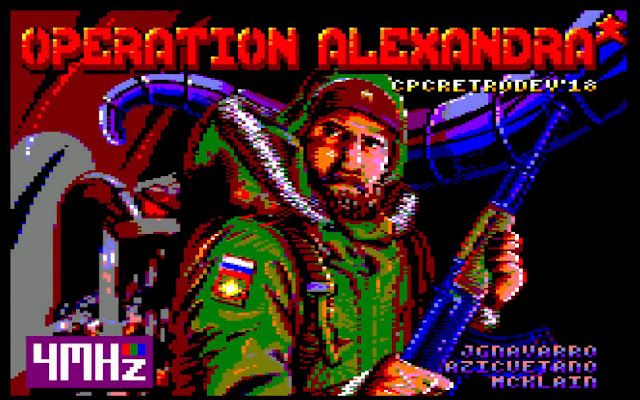 With all the playable Amstrad games fast approaching at the end of the CPCRetroDev, there's still a number of them we haven't mentioned yet that is sure to whet your appetite to one of the best competitions we've seen so far. As after already announcing games such as Jarlac and even the Legend of Steel, 4MHz has astounded us with its entry of ' Operation Alexandra '; an upcoming action packed platformer that set in a secret Nazi military base in the Arctic!

Story :
In 2016 Russian scientists discovered a secret Nazi military base in the Arctic built in 1942, a year after Adolf Hitler invaded Russian. Although the scientists descovered bunkers, fuel tanks and even well-preserved documents, as well as more than 500 objects from the Second World War era, it was believed the place was abandoned when stationed scientists were intoxicated with polar bear meat in 1944 and had to be rescued by a German submarine. Operation Alexandra is about the mysterious events that occurred in the mid-1970s, during the Russian deployment in the area. Events that have tried to be silenced, but that should see the light of day after so many years in the dark.