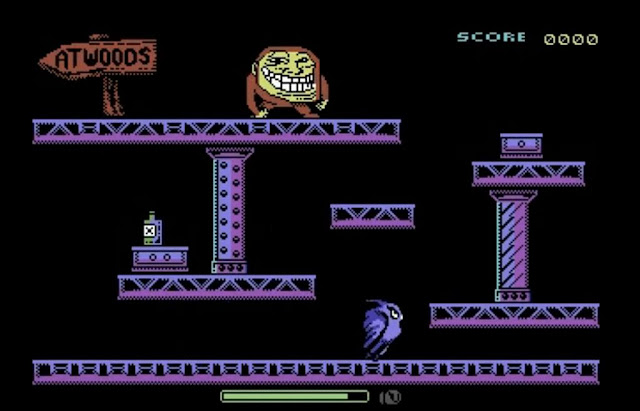 We don't get many Trolls on Indie Retro News thankfully, maybe the odd one waiting to kick up a storm in the thread comments. But virtually smacking a Troll in a C64 game certainly sounds like a fun experience indeed. Yes that's exactly what you do in this early preview on the C64, ' Donkey Trolls Preview ', as this game developed by LOBO, SNABEL and QOW, you need to fly to the top of the level and smack that Troll right in the snoz!


Mixing it up with Donkey Kong and a mighty Troll, you must flap around the level collecting drink while building up enough force to punch the Donkey Troll in the face to move onto the next. Beware however not only will the Troll throw keyboards around thinking he's some sort of keyboard warrior, but if you don't build enough punch force, you wont be able to hit him in revenge!