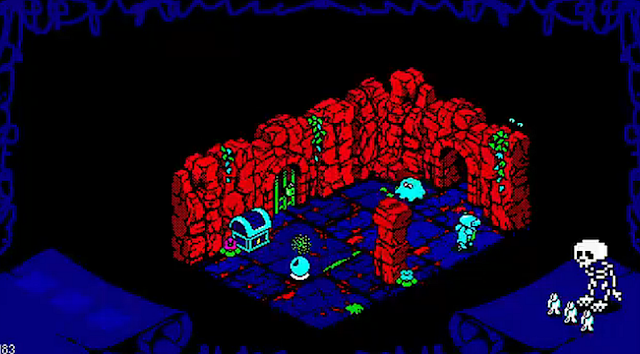 Remember when we gave you the heads up that Ultimate Play the Game's famous classic Atic Atac, was not only being remade for the PC but it was also being remade for the ZX Spectrum Next? Well there's great news for today, as after checking their tweeter feed we've come across a new update regarding their in dev remake of Melkhior's Mansion, that not only shows how far the game has come in developments, but also a first early look at the HUD!

When the graphics guy comes up with a circular thing, it's time to get some funky collision detection on the go... @hot_piping @alberto_mcalby @9bitcolor #melkhiorsmansion #aticatac #zxspectrum #gamedev #monogame #screenshotsaturday pic.twitter.com/ChEdyjjd8k
— Richard Jordan (@EricRetro) August 3, 2019

As we said before.... Ultimate Play the Game released so many incredible titles in the 80's but this inspirational remake of Atic Atac, which is a remake of a game originally released in 83, does not only look like an impressive game, but most likely will be a hit download when it finally appears at some point in the near future. It features an isometric engine by Retrospec remake game developer Richard Jordan (Klass of 99/Zub), glorious remade graphics by Craig Stevenson with full backing by Rare studio, who still owns the right to the franchise, and full porting to the ZX Spectrum NEXT by Kev Brady!