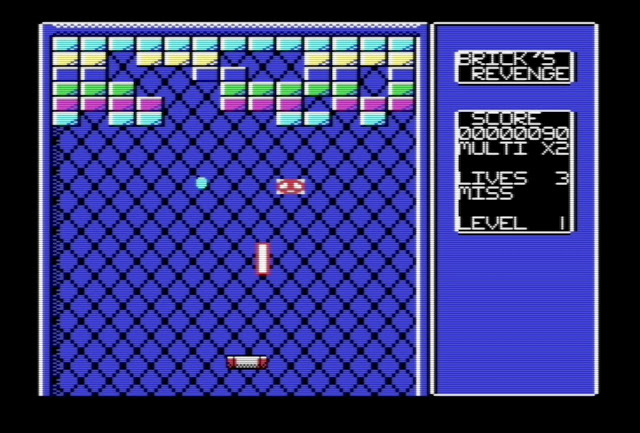 The sun is going down fast and it's nearly time to rest, but before that happens we thought it best to mention Amazingly Awful Games upcoming game of ' Brick's Revenge ', which is a clone/inspiration to classic games such as Arkanoid or even Breakout and is coming to a C64 at some point soon.  Now if you remember Arkanoid; an arcade game first developed by Taito in 1986, with the bat like device scrolling from side to side at the bottom of the screen, bouncing an orb back and forth and smashing blocks for a high score, then keep eye out for this game as it looks very similar and just as fun.


As the description says : This is a very rough demo and a lot will change between now and the finished game, currently there is only Level 1, which is complete so any additional levels in the demo are just Level 1 again with a higher minimum number of bricks on the screen. You die if you are hit by an enemy brick or laser or if you miss the ball 3 times in a row.