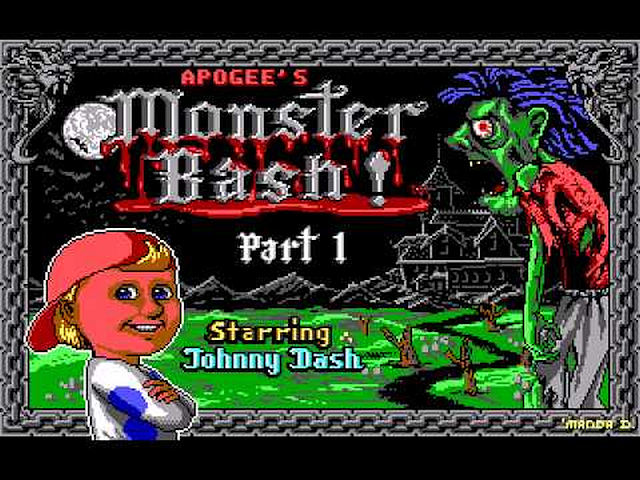 Well, it’s that time of the year again. Especially for ghosts, goblins and other creatures of the night. Welcome to our Halloween special review. And this time we have quite the eerie delicacy prepared just for you all. I’m talking about Monster Bash. Monster Bash is an platform game made by Apogee Software and originally released in 1993 for DOS. It was re-released in 2014 for Windows, MacOS and Linux.

But before we look at this child of the night, let’s first look at the covers: 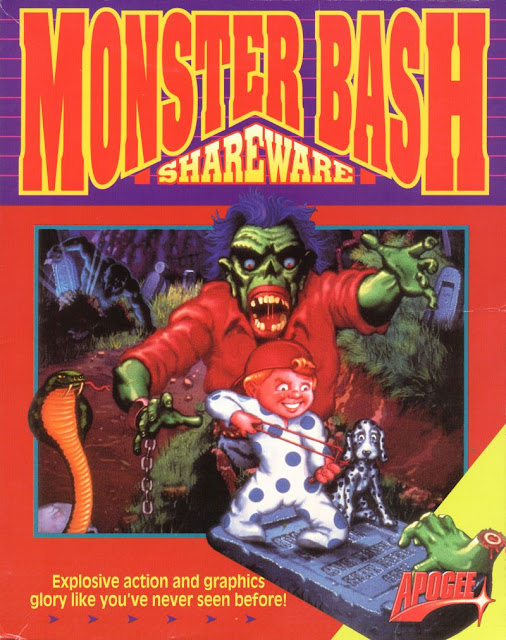 This is the original shareware cover and it’s kind of meh, featuring our hero, Johnny Dash, armed with a slingshot facing the Thing from the Addams Family at a cemetery while a zombie and other monsters creep up behind him. It’s an OK cover with horror elements in it.

This cover would later be remade for the online re-release: 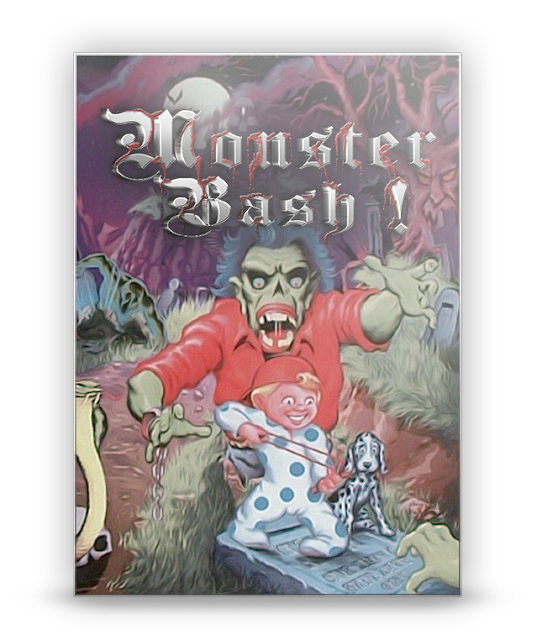 Slightly better now, in my opinion (except perhaps for the snake on the right). I particularly love the title art.

But there’s another online cover: 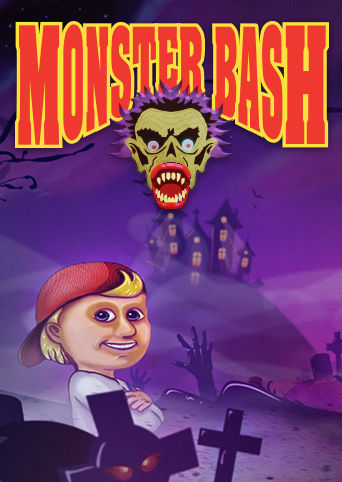 Man, this one is a lot worse. It’s just a bad rendition of Johnny at a spooky graveyard, smiling like an idiot. Although the title art isn’t bad, I still prefer the one in the previous title. At least the mansion on the background does look somewhat eerie.

But enough with the covers and let’s boot this zombie, shall we?


The game starts with an intro of Johnny throwing a rock at a zombie using a slingshot and then said zombie head exploding in several blood splotches. It’s a short but nice intro to get your sweet blood pumping. And then we have the title screen with a nice rendition of the Monster Mash song (Monster Mash=Monster Bash, get it?!).

The story starts during a stormy night when Johnny is wondering about his missing puppy, Tex. Then abruptly, Johnny receives a visit from the Monster Under the Bed who informs him that his puppy was actually stolen by Count Chuck, ruler of the Underworld, along with several other pets. Chuck wants to transform the pets into monsters and create a army to invade the Dayworld. The Monster then offers Johnny a slingshot and charms his pocket so that it’ll always be full of stones for the slingshot (the infinite ammo in-game) and directs Johnny to the Underworld to save tex and the rest of the pets. 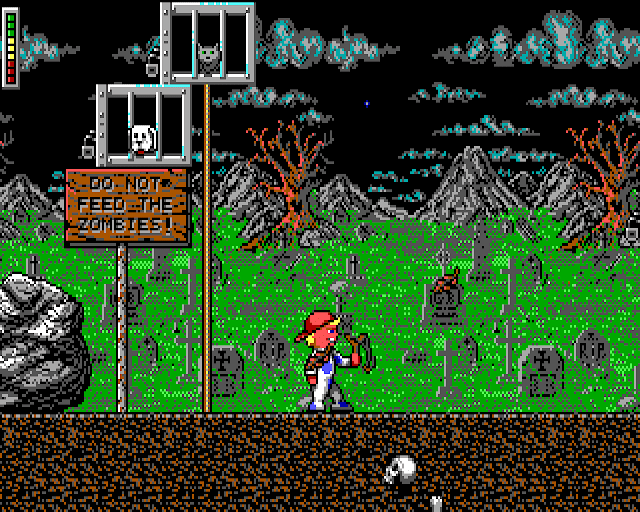 And after choosing the difficulty level, the game properly starts with Johnny at a spooky graveyard where we must get all the pets out of the cages before finishing the level. We’re initially armed with the aforementioned slingshot with infinite stones to throw at the enemies (which includes zombies, skeletons, skulls and others) and to shoot the cages open to free the pets. We can, however, upgrade our stones with limited but more powerful ammo, like triple-shot rocks, exploding rocks and monster-seeking lawn darts, among others. You also have the ability to not only shoot straight ahead, but you can also shoot upwards in an arc and the stones can also ricochet on almost every surface (very helpful to hit targets out of reach).

The game is divided in 3 episodes with the first episode distributed freely (as per shareware custom) and each episode has around 8 levels, with a boss at the end of each episode and one or two sub-bosses around the third or second level of each episode. But all the levels are well designed with a great variety of enemies and traps, although some can be quite labyrinthic and long (even if you don’t count the secret areas). And if you ever get lost, you have access to a compass in the pause screen that always points towards the nearest cage and sometimes a small rat might appear, showing the right way. 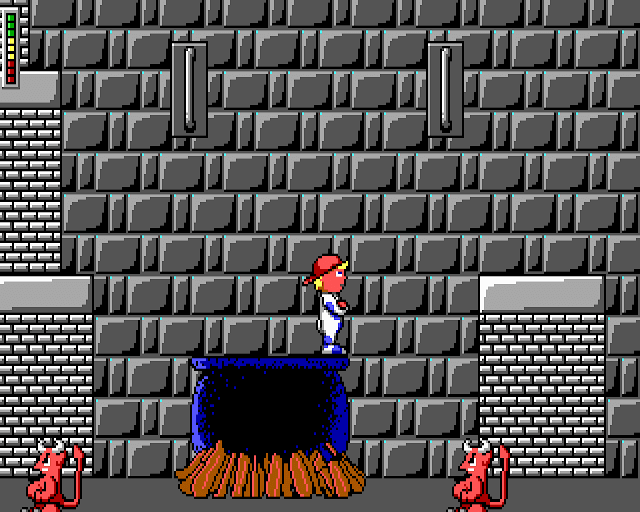 And although some of the intermediate and later levels can be hard (due to difficulty spikes here and there, usually at the beginning of the second and third episode), the bosses aren’t really that hard once you figure out their patterns. And also some of the levels’ designs are repeated throughout the game. Luckily, there’s also flag points throughout the levels which will allow you to return to the last one after you lose a life.

There’s lots of visual references to classic horror movies, from the enemies’ designs to the levels’ backgrounds. And although the game itself isn’t scary, it’s definitely horror-themed with some fantastic homages. And if you don’t mind some blood and guts along with the increased difficulty, it can be considered appropriate for kids to play and enjoy.

The graphics, albeit being outdated EGA 16-colours for 1993, are colourful, especially the enemies’ designs and some of the levels’ backgrounds. The sprites are big with an average animation. The sound effects aren’t anything special (there’s even a weird bark everytime Johnny stops running) but the music is good with a fantastic soundtrack. The controls are great, whether you’re playing with the keyboard or a joystick/gamepad. 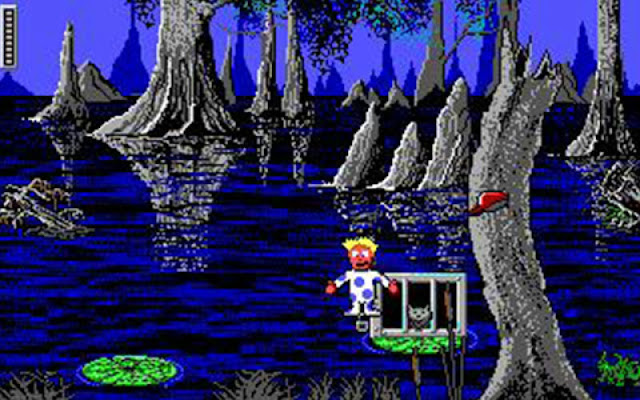 “Be afraid. Be very afraid!”

In conclusion, Monster Bash is a solid platform game with great visual horror references, good controls and musical soundtrack, but it has some severe difficulty spikes throughout the game which makes the game really hard during the 2nd half and some of the levels do seem repeated, design-wise. But it’s definitely a nice choice for this Halloween if you’re looking for some horror-themed platformers. Give it a shot by buying here at the 3D Realms store, here at GOG.com or here at Steam.

So, how did you enjoy our special Halloween review? Comment below and I hope you have a good Halloween… ALONG WITH THE CHILDREN OF THE NIGHT! WHAT BEAUTIFUL MUSIC YOU’RE GOING TO MAKE TOGETHER! BWAHAHAHAHAHAHAHA!!!!!!