Broken Sword: The Shadow of the Templars BIG review by DarkwyndPT 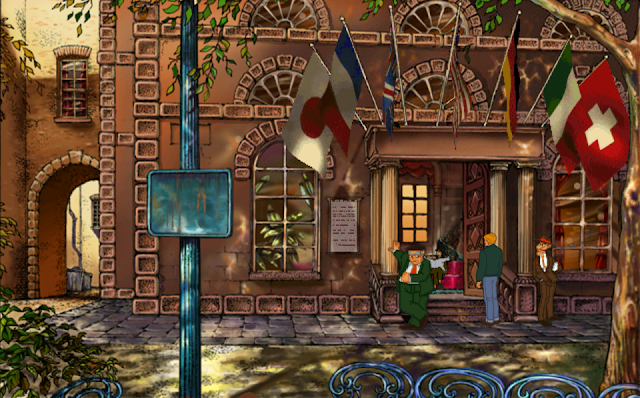 As I promised, here’s a new review and to make up for the lack of adventure reviews in the past two months, I’m reviewing another fan favourite game (and also a personal favourite): Broken Sword: The Shadow of the Templars. Broken Sword: The Shadow of the Templars is a graphic adventure developed by Revolution Software and published by Virgin Interactive. It was originally released in 1996 for DOS, Windows, Macintosh and Playstation (in the US, it was released under the title Circle of Blood). It was ported to the Game Boy Advance in 2002, to Palm OS in 2005 and to Windows Mobile in 2006.

After the success of Lure of the Temptress and Beneath a Steel Sky, Revolution had made their presence known in the graphic adventure market and needed to continue their upstart scale, so Charles Cecil (Revolution’s main designer) decided to create a game partially inspired in the book The Holy Blood and the Holy Grail (which also inspired Dan Brown’s The Da Vinci Code). But Cecil wanted to make a more story-driven and cinematic game in order to distinguish Revolution from Sierra and LucasArts.

But before we continue with our review, let’s look at the covers, shall we? 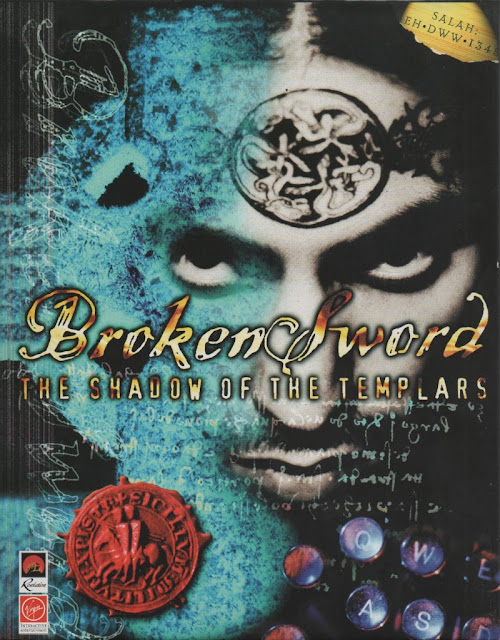 This is the most famous cover and I believe it’s quite good and a bit ominous, revealing several elements present in the game without giving anything away. 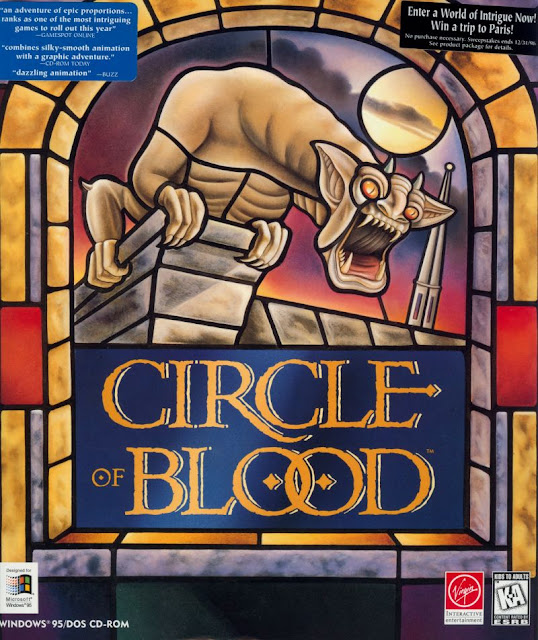 Does anyone remember the Gargoyles animated series?

This is the US cover, revealing a stained glass picture of a gargoyle, which looks like the cover of an animated DVD. A bit simplistic compared with the previous cover, but still not a bad one. 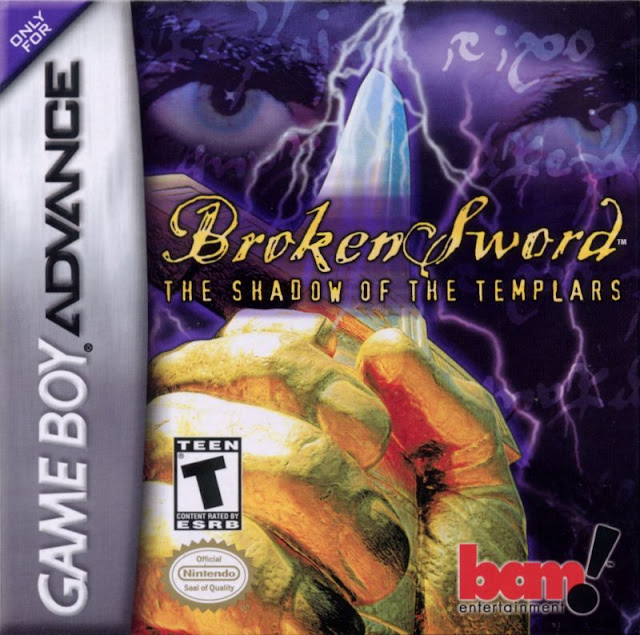 This is the US GBA cover and it looks like the cover of an action or RPG game, not a graphic adventure. A rather generic cover, in my opinion. And another thing: that sword isn’t broken! 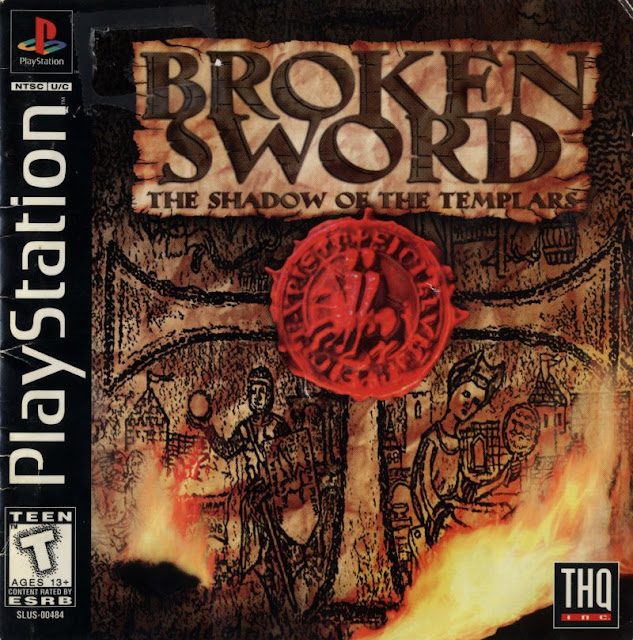 This is the US PSX cover and it’s probably my favourite one. It doesn’t have as much elements as the 1st cover, but it shows a very important element of the game. Sometimes, less is better. And check out the cool back cover: 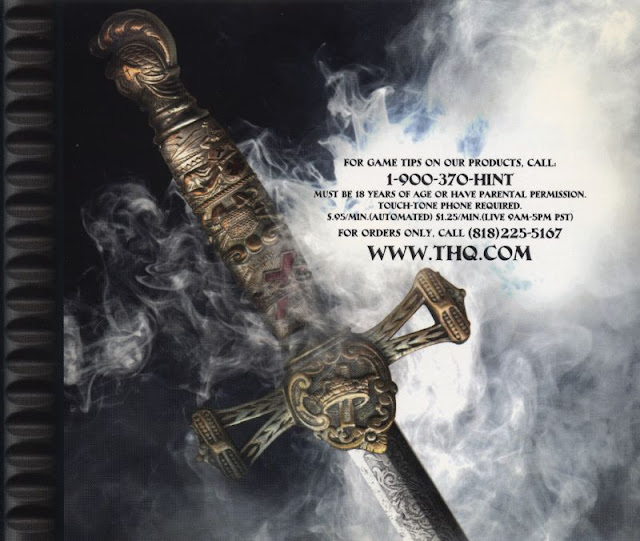 I’m calling it: best PSX graphic adventure back cover EVER!

But enough talk and let’s boot this sucker:


As you can see, our adventure starts when George Stobbart, an American tourist in Paris is almost killed by an explosion provoked by someone dressed as a clown. George then, for some reason, swears he’ll find the killer clown and bring him to justice. Honestly, he didn’t even knew the real target and yet, he simply decides to find his killer. Of course, the plot goes much deeper than a simple assassination.

From here, it’s your typical graphic adventure: find objects, use the objects to solve puzzles, open new areas with new puzzles and interact with the environment and the NPCs. But what immediately becomes noticed in Broken Sword is the very intuitive and easy-to-use control system where the mouse icon changes when it’s over an hotspot and you’ll simply have to left-click for George to interact with it or right-click to inspect it. Another thing that gets noticed right away, it’s the depth of interaction with the NPCs and the well-written dialogue. During dialogues, you have two bars: one with icons representing the subjects you can discuss with them and another of the inventory with the objects you can show them.

Another thing that might become unnoticed at first, it’s the inventory itself. It’s very easy to use. You simply move your mouse pointer to the upper part of the screen and there it is! You don’t even have to click anything to access it.

But what really shines through is the story that looks like a modern-day Indiana Jones adventure and the complex and colorful characters you’ll encounter throughout the game. I love stories where the protagonist has to traveled to several locations around the globe in search of an old artifact or treasure. And the characters are all very well written and complex, albeit perhaps a bit stereotypical. Which is further accentuated in the excellent voice-over work with all the accents in place (although some Parisian characters seem to lose their French accent here and there). There’s even good humour in some parts and although the story has its serious and grim moments, it never gets grim and dark.

Talking on the phone with Nico.

One of these complex characters you can meet at the beginning is Nico Coulard, a photojournalist that helps George throughout the game by advancing the plot and providing hints in case you ever get stuck, although she only becomes active at the very end (and in the Director’s Cut she gets a much bigger role, but I’ll talk about it later).

Another great thing about Broken Sword is the graphics that are all very well designed and colourful and the superb animation that looks directly taken from animated shows and movies. The soundtrack by Barrington Pheloung (better known for his work in Inspector Morse) is quite good and provides a proper atmosphere for the game.

But back to the graphic adventure elements. Apart from the infamous goat puzzle, all the puzzles are well presented with some early objects having more than one use and with a proper difficulty to them. The aforementioned goat puzzle however, lacks any hints in how to solve it and the solution is very counter-intuitive. Luckily, it was fixed in the Director’s Cut. 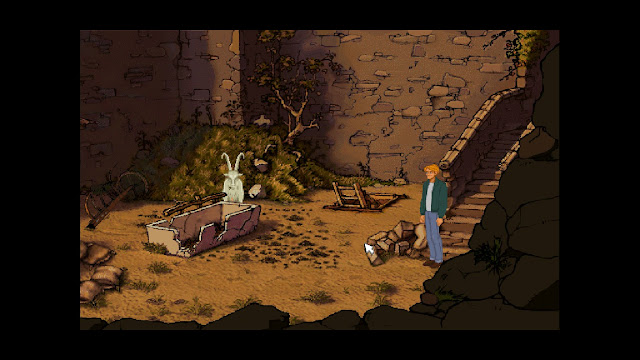 Probably the most hated goat in computer history.

Another sore point in this game is the protagonist itself. While all the other characters are interesting and well-fleshed out, George is nothing more than a stereotypical Midwestern white American male with no real personality traits that sometimes behaves a bit condescending towards some of the other characters. I know he was designed that way in order for the gamers to project their personality into him, but he just comes out as bland and generic.

But apart from these two points, Broken Sword is a good adventure game with a good length to it and with a large scope and areas to explore. It might not appear as good as Sierra’s and LucasArts’ graphic adventures, but it’s still a very worthy alternative to these two and it’s easy to see why it started a popular series that still continues as late as 2014 with rumours about a film adaptation. Needless to say that I highly recommend it.

In 2009, a remastered version called Broken Sword: The Shadow of the Templars – The Director’s Cut was released by Ubisoft for the Nintendo Wii and DS. In 2010, it was ported for iOS, Windows and Mac OS X, in 2012 for Android and in 2013 for Linux.

The Director’s Cut not only improves the graphics, sounds and resolution, but it also adds new sections in which you plays as Nico. These new sections expand the background story a little and fleshes-out Nico a lot more, making her an even more interesting and complex character. However, these new sections have easier puzzles, only exist in the first half of the game and don’t have any real impact in the game’s overall plot.

It also adds new animations during the cutscenes, but it’s very limited compared with the original animation. Especially the new character portraits during the dialogues. It also eliminates a lot of the hotspots, which limits heavily the interaction with the environment in order to make it easier to play. And there are also other minor differences.

Well, I hope you’ve enjoyed the review and if you haven’t had the opportunity yet, come and join my new Facebook page and Twitter feed. Also keep an eye on my Twitch stream where I’m going to start my Halloween stream with a game that keeps you in the dark when no else is around (see you can guess it). In the meanwhile, keep on playing.