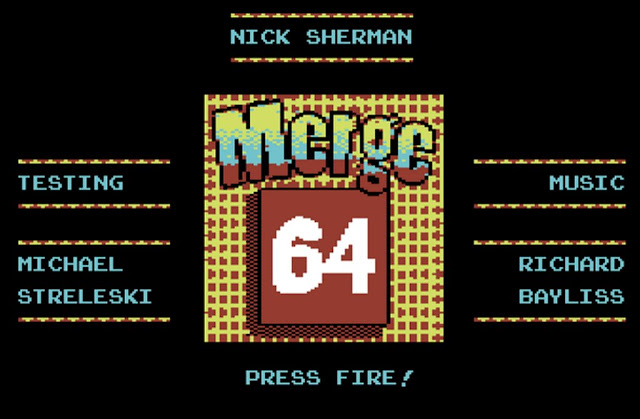 I'll tell you the truth right now, I'm terrible at Puzzle games! Not only that, but trying to write an article regarding anything Puzzle related just isn't my strong point. Still if you like puzzle games and have a C64, you might be interested in playing Arla Games latest C64 release called Merge 64; a game that was written while watching Shallan's 16-hour charity steam, in which he built the C64 game 'LUMA', and raised over $1,200 for Extra Life! ( Donations still accepted! )

The blocks continually scroll from right to left. You can move your block on the left to any path you like and then press fire to launch it down the path. If it stops next to a block or blocks containing the same number, they will merge to create a block of double value. Each extra block merged doubles the value further, and newly merged or moved blocks can also combine with blocks next to them to create long chain-reactions. The game ends when any of the blocks reach the left hand side.

Written in KickAssembler using Sublime Text, CharPad and SpritePad.
Music by Richard Bayliss (reworked slightly to free up channel 3 for SFX - sorry Richard!)
Testing by Michael Streleski (if there are any remaining bugs this is down to my impatience to finally get this out of the door!)

Links :1) Source  (Thanks Milo/Saberman for the heads up!)