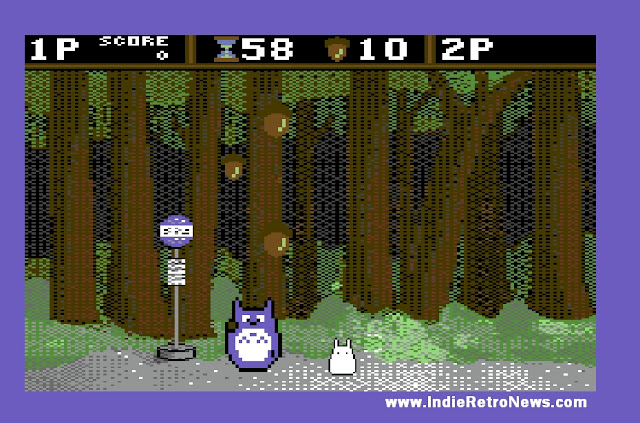 There's a lot of people out there that love Studio Ghibli; a Japanese Animation studio who created such amazing Animated movies such as Princess Mononoke, Castle in the Sky, Spirited Away, Howl's Moving Castle and Tales from Earthsea. Well there's one developer out there I could class as an avid fan and has set his sights to the C64, and that's Gabriele Gorla's 'Totoro64'; A game in which is based around the 1988 movie My Neighbor Totoro.

The film—which stars the voice actors Noriko Hidaka, Chika Sakamoto, and Hitoshi Takagi—tells the story of a professor's two young daughters (Satsuki and Mei) and their interactions with friendly wood spirits in post-war rural Japan. In this preview however which is also a love letter to Studio Ghibli, you play as one of the woodland spirits and must collect a set amount of acorns falling from the trees to move on to the next stage.