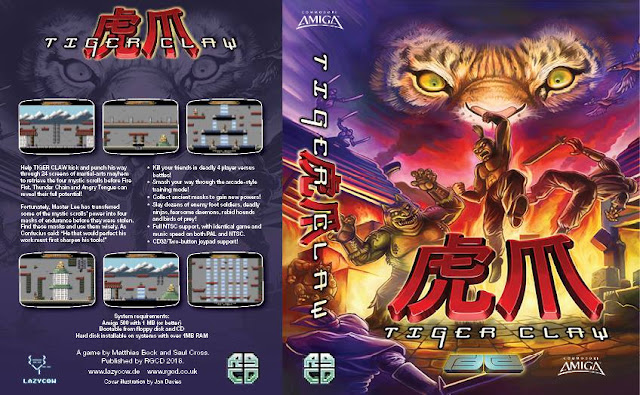 Well this is fabulous news, as earlier today we found out that RGCD's brilliant Bruce Lee inspired game 'Tiger Claw', will be coming to the Amiga and Amiga CD32 just in time for Christmas. This game was originally released for the C64 developed by Lazycow and Saul Cross with an exclusive release on cartridge by RGCD for backers of the C64 in Pixels Kickstarter, before it became available to the general public as a digital download.

Tiger Claw is a kick ass beat em up game in which you need to fight with all your might through 24 screens of martial-arts mayhem to retrieve the four mystic scrolls before Fire Fist, Thunder Chain and Angry Tongue can reveal their true potential! If you've never heard of this game before, you are in for a treat! As when we played it on the C64 we noted in our review that the game not only oozed quality, but the opening screen and soundtrack really showed us just how damn good this game truly was.