Donkey Kong - Atari 8-bit Arcade HACK has finally been released for all to enjoy! 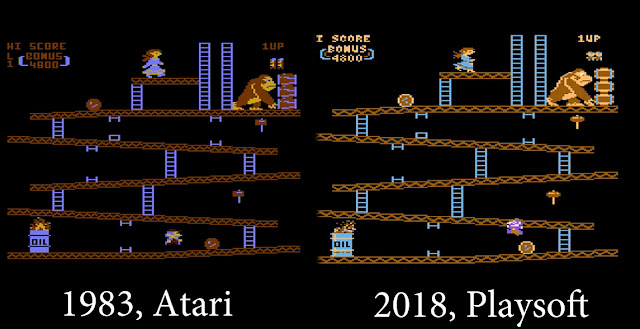 Way back in 2016 we mentioned Darryl1970's Atari 8-bit Arcade hack of Nintendo's 1981 original classic ' Donkey Kong ', in which you played as Mario that must avoid obstacles across a number of platforms, with sometimes a hammer in hand to save a damsel in distress from a giant ape called Donkey Kong. Well there's good news today as through many months of writing and thanks to a heads up by our good friend John Shawler. We can finally announce Darryl1970 in conjunction with Playsoft, has released the final version of the hack which brings it much closer to the Arcade original!


This Arcade hack for the Atari 8bit has been one of the most eagerly awaited of hacks during our many features, as there hasn't just been a slight colour change, as they've gone above and beyond and included arcade-accurate renditions of the girders, Mario, Pauline, and even Donkey Kong himself. So yes a truly great hack and if you want to compare both versions, check out the video above then download via the forums below.