BioJet - Flying platformer as a first release for the Amiga community! 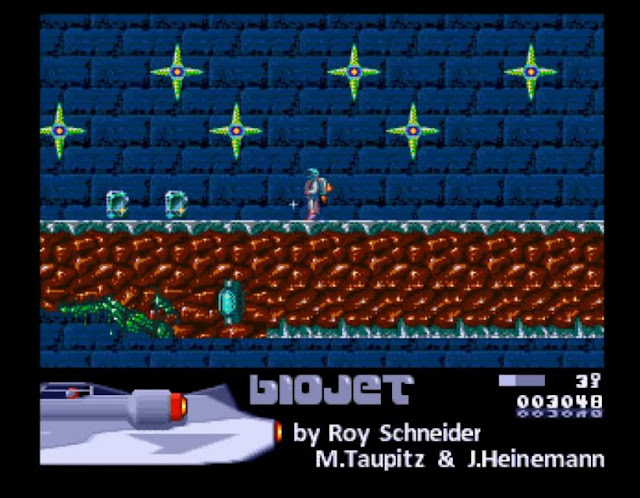 On our return to writing game news, Saberman was kind enough to send us some Amiga updates, as he has just told us Roy Schneider and team have released the flying platformer of BioJet. Now if you've not heard of this game before, that's because it was only just released on the Aminet file website, and is using the graphics of a previous game called Cybergene. Which was released on the MS-DOS platform in 1997 as a project drawn on serveral Amiga's.


BioJet was entirely written in 68K assembly, taking advantage of horizontal sprite multiplexing, using a heavy copperlist, in order to make the scrolling background image. Although a more detailed write up can be found at the source link below, you play as a Jet man and must traverse many different levels, while collecting items for points, keys to open doors and the avoiding of deadly enemies and spikes which are found throughout.
Requirements:

To install the game on a hard disk, first double-click
your hard disk icon. Then insert the BioJet disk into
a drive. Double-click its icon and drag the BioJet
drawer into the hard disk window.