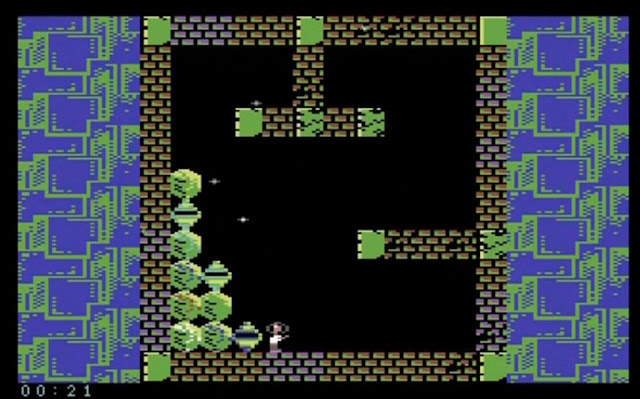 We've certainly featured the 1984 Boulder Dash game a lot these last few months, what with the release of Boulder Dash Junior II The Final Dig and Boulder Dash Senior to name but a few. But what if you could play a Boulder Dash style game, but instead of the game being a single screen arcade/puzzle title is instead turned into a C64 homebrew where the entire game screen can be rotated? Welcome to Trzask Tensorskiego 64; a brand new game from unctio / ver as a port of the Atari XL/XE game released in 2017


In the 1984 game of Boulder Dash you had to dig your way around a level while collecting Diamonds and the avoiding of dangerous boulders that would most likely squash you flat. What makes this game different however, is although you still have to collect Diamonds, there's no digging involved as levels must be rotated so your character can reach the items found on higher platforms. Beaware however if a level is rotated incorrectly and you are in the way, you will still get squashed by falling objects and it's a game over!