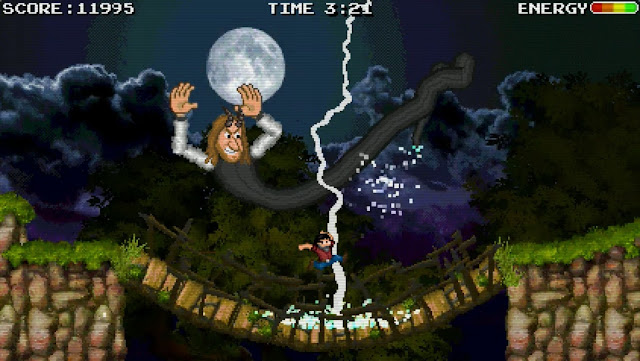 Ghosts n' Goblins is getting another feature for this week, as we've been told through Twitter, that Dr. Kucho! Games will be releasing their GNG inspired game of ' Ghosts 'n DJs ' as of Feb 6th on Steam for PC and MAC. This game according to the creators as an inspiration of the 1985 hit classic, is a pixel-art run and gun side-scrolling action platformer set in a parallel universe in which the music scene is being dominated by fake artists and DJ’s.

As noted by the description, you must help Dr. Kucho! on his crusade for the love of music. Fight the fake and avoid cheesy music to poison the weak minds. Find the template and destroy it so ghost producers won't be able to make music for anyone and fake artists will be forced to live by their own merits. It’s time to send these creatures back to the 16-bit hell they came from using musical supports as weapons!